At some point, long ago before I was a full-on gardener, I read that there’s an often overlooked surface on which to garden: vertical ones.  This was before the proliferation of nifty things like Wooly Pockets that allow anyone who wanted one to create a vertical garden, indoors or out.  It was also before I was aware of the vertical gardens of Patric Blanc Vertical Gardens, which have since influenced people all over the world, not only in gardening, but also in urban sustainability.  What the article I read was most likely referring to were places like fences, walls and the sides of structures that are often bereft of greenery.  And the idea that it was an underutilized space stuck with me.

The article was probably written for people with limited gardening space, and as I lived in big cities for a long time I didn’t have much room for plants, so I was likely looking for ways I could add more greenery to my life.  Now that I have a somewhat spacious garden myself and design gardens for others, that idea comes up again & again as I look for solutions to privacy, to hiding unappetizing surfaces, to buffering noise, to adding color & greenery to small spaces, etc…

Nature, after all, gardens vertically all the time with plants that hang down, nestle into crevices, and climb up vertical surfaces like stone and other, taller, plants.  So why shouldn’t you?

In looking for inspiration I discovered that England, in particular, has a long-standing love affair with climbing, vining plants — wisteria, roses, ivy, etc… growing over arbors, up the sides of estates and manor homes, or scrambling along a wall of a cottage.  English gardeners have taught me the difference between a climbing and a rambling rose, for example, and how best to prune a wisteria.  They’ve demonstrated how to add wire structure to a vertical surface to support a climbing plant, and why planting directly against a building’s foundation is a bad idea.

In my own garden I see all vertical surfaces as an opportunity for more gardening (!) and have been slowly covering fences, arbors and other vertical surfaces with vines.  I have vines that use nearby evergreen plants as support — bringing color to areas that otherwise wouldn’t have any — and I have at two instances of a pair of vines that bloom at different times sharing the same vertical space so that I get something interesting to look at at different times of year.  I have yet to grow vines against the house, but once I can find a way to do it without sacrificing the siding or our ability to do maintenance to the house, you can bet I will.

And I’m always looking for more opportunities to add vines.  They often don’t take up much room in the ground, so are relatively easy to add to existing plantings, and any new garden structure I create has the idea of a surface for vines built right in.

Shall we tour the vines currently in my life?  Here we go… 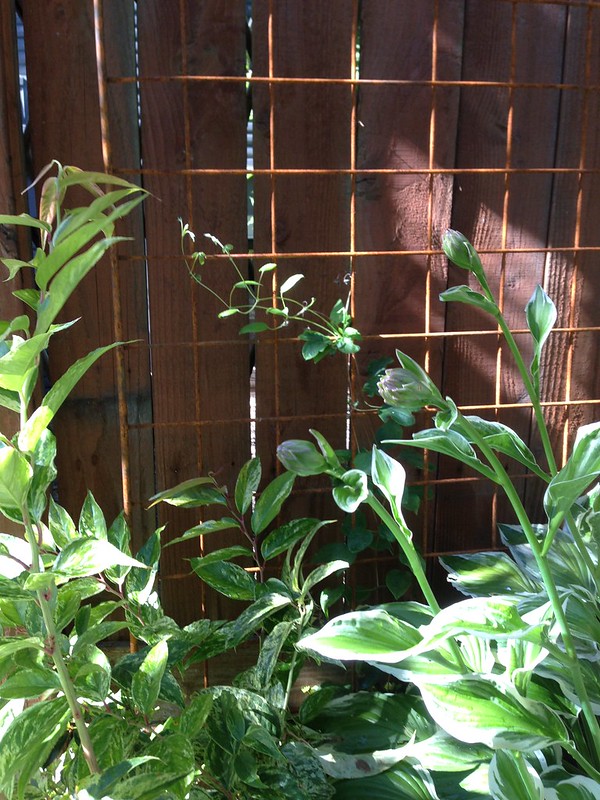 New to our garden this year from the HPSO Spring plant sale (aka: Hortlandia) is this Clematis ‘Guernsey Cream’. It’s not currently sporting any flowers, and is slowing grabbing hold of the tall, steel trellis we attached to the fence for it. 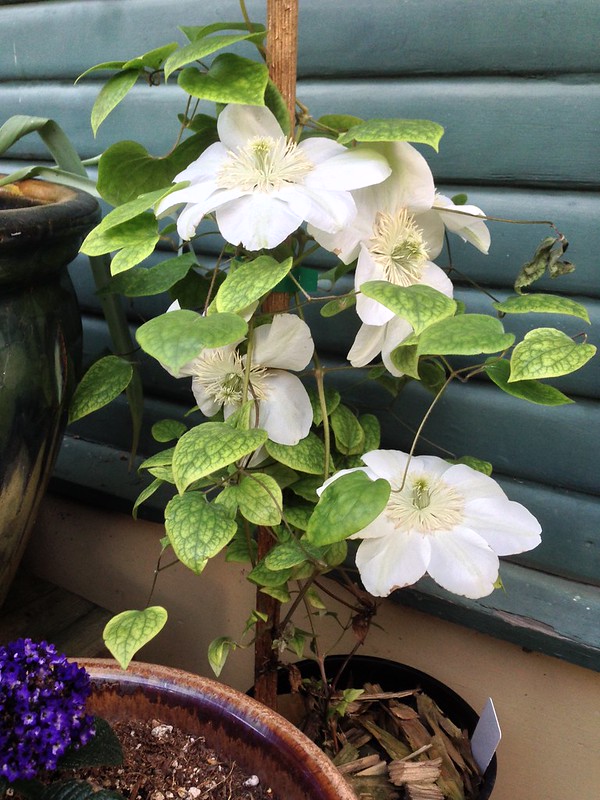 Here’s what it looked like just after we purchased it back in April. It has the most gorgeous large, white flowers, that I think will echo the white variegation on various plants I have nearby really nicely. 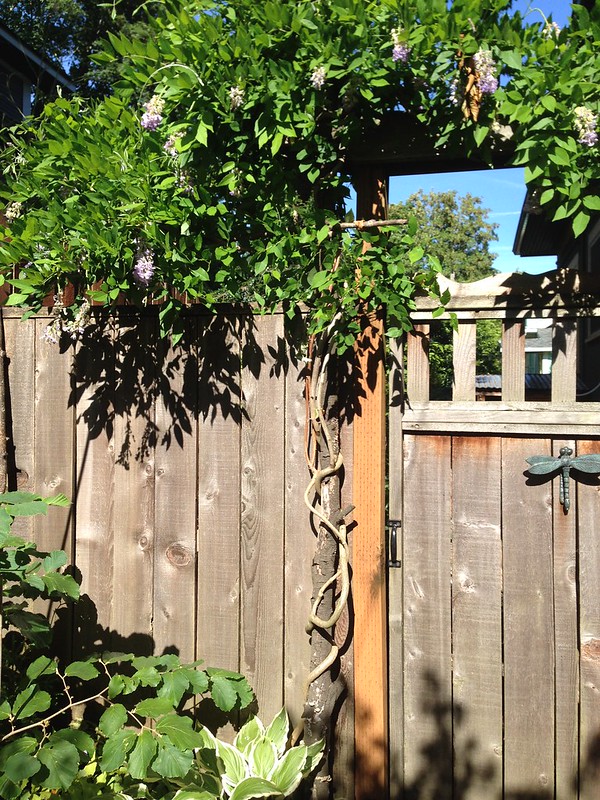 Just up the path a bit is the north gate to the back garden, and over that is our Wisteria Frutescens ‘Amethyst Falls’ (American Wisteria). Much less voracious that its Asian relatives, the American Wisteria grows about 1/3 of the size and is thought to be quicker to flower. Ours grows on the North side of our house so gets about a 1/2 day of sun in the midst of the growing season. It now flowers reliably & profusely after about 5 years in the ground with smaller, but equally beautiful racemes to its Asian cousins.

We’re training it up a branch of an old apple tree onto the arbor above the gate, and eventually the branch won’t be needed for support and we’ll just let it rot away. 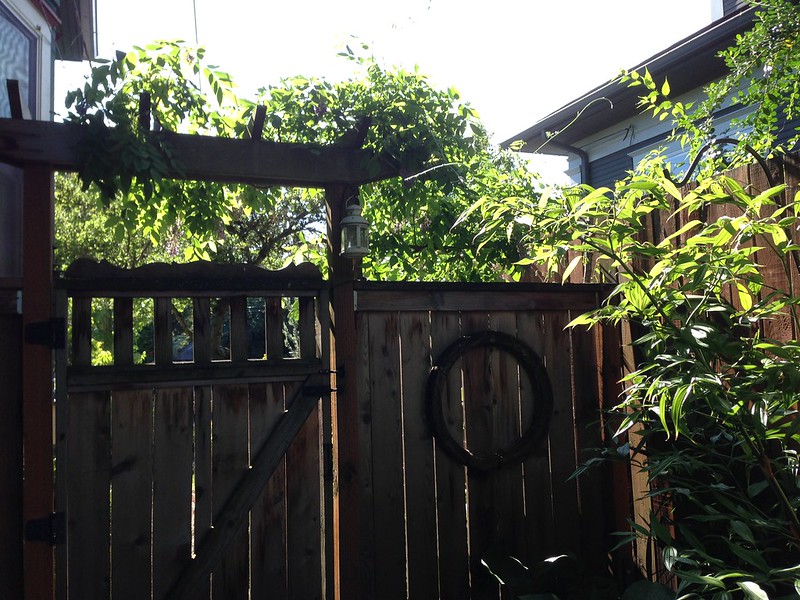 One of my favorite views of it is from the other side of the gate with the sun streaming through. 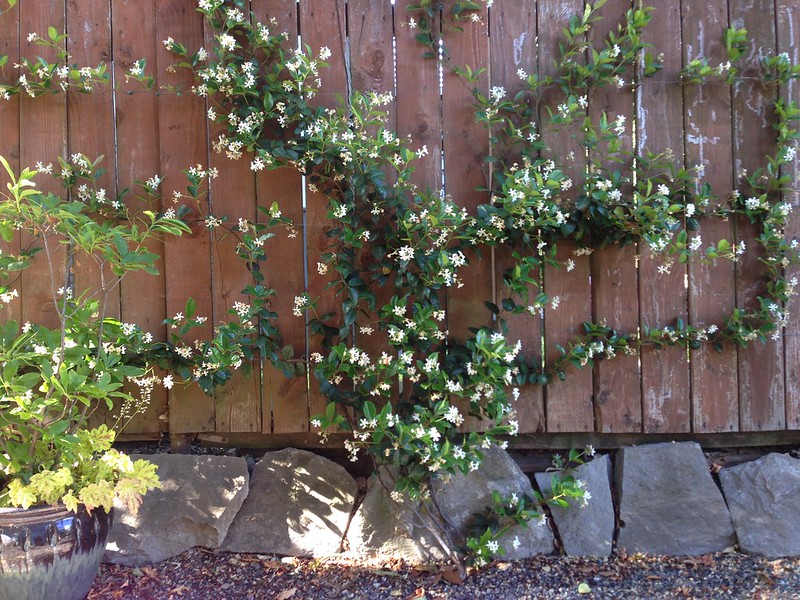 As we travel down the path into the back garden there’s a Trachelospermum Jasminoides trained against the fence. I’ve attached a system of wires to the fence boards to support it, and I wind it around each wire as it grows. It will eventually grow beyond the width allocated, so I’ll just trim it back to the general shape I want. It will also fill in between each row of wires as it grows creating a green wall of evergreen foliage over time. This is at the top of our basement steps and just outside the kitchen windows, so the scent is enjoyed as we go about our lives even when we’re not sticking our noses in it. 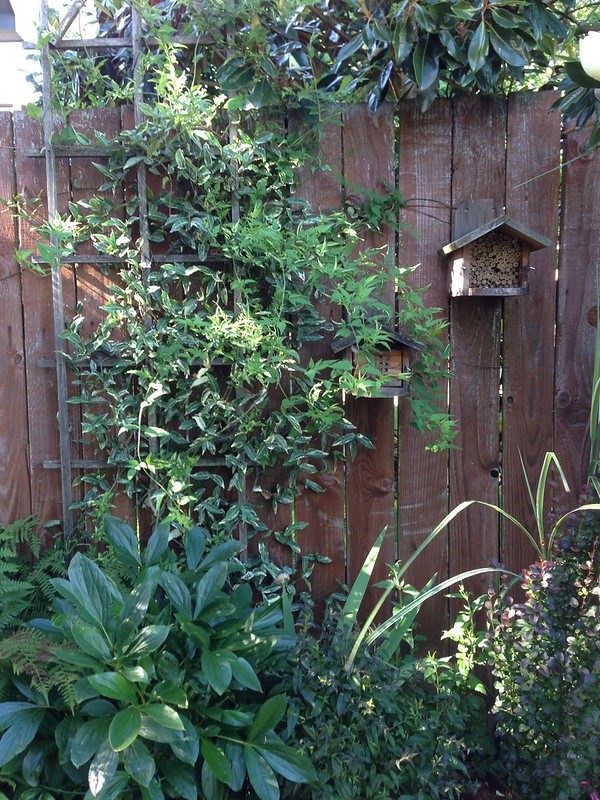 A little further along we come to the back corner of the house where the side path meets the back garden — it’s also the bottom of the steps down from the deck at the back door. Here we have Trachelospermum Jasminoides ‘Variegatum’ & Jasminum Polyanthum duking it out on the trellis. Our neighbor has a beautiful magnolia on the other side of the fence, so rather than planting something that would block our view of it, we decided to draw your eye up to the magnolia via the trellis. The Trachelospermum is evergreen, as is the magnolia, so there’s something beautiful to enjoy at this critical vantage point all year round. 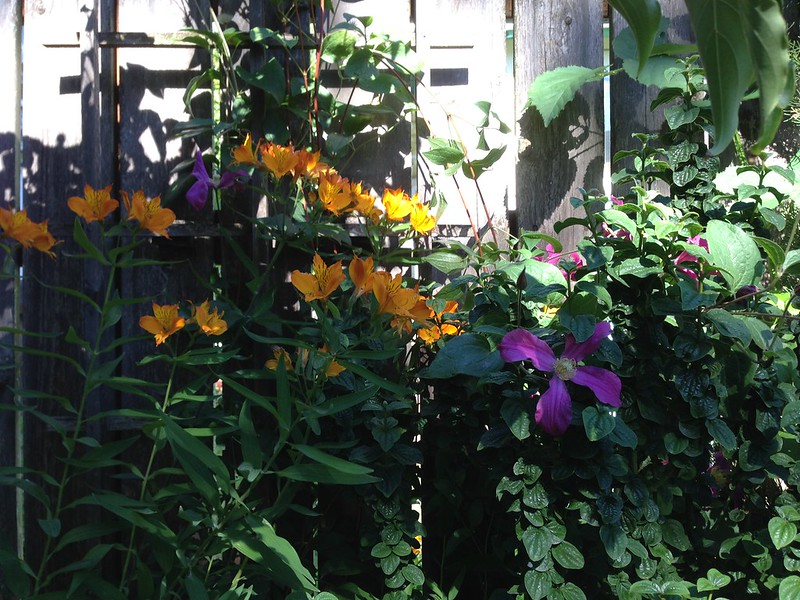 In the NorthEast corner of the back garden we have a magenta Clematis — don’t know the variety — got it from the local grocery store sale (ie: the sad plants sale) at the end of the season a couple of years ago. This is another case of attaching a trellis right to the fence to support the vine, and right now we get to enjoy its blooms with the orange Alstroemeria. It is partially shaded by a Kousa Dogwood but that doesn’t prevent it from flowering. 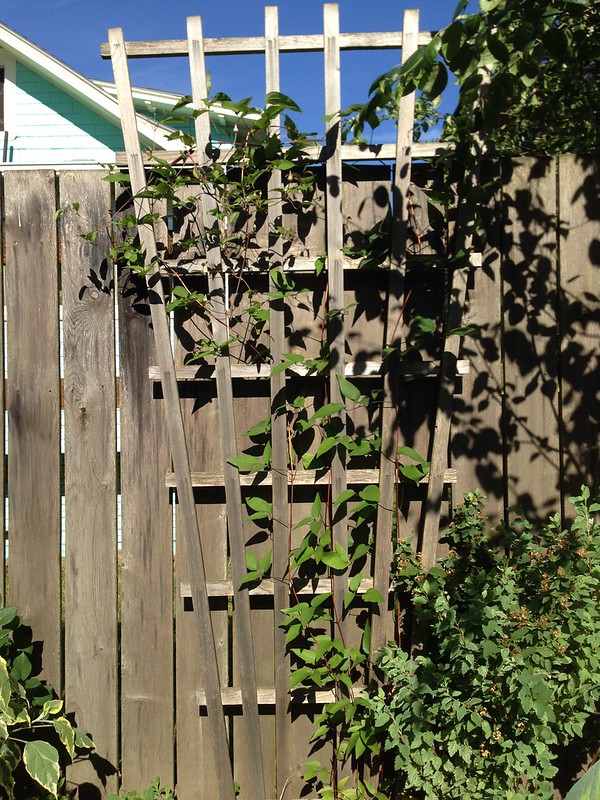 In the opposite corner of the back garden we have a fan-shaped trellis stuck in the ground with another NOID clematis growing on it. Once it blooms I hope to ID it. 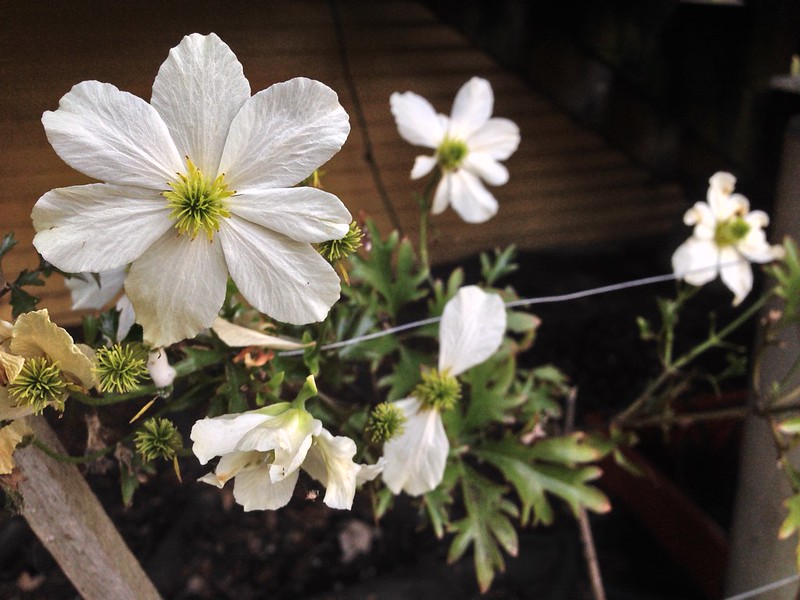 Trained along wires under the back deck is Clematis ‘Early Sensation’, which blooms in early April. I used to have this in a large pot growing on a tuteur, but in changing out my container plantings a couple years age I cut it back really hard, and moved it to a nearby spot in the ground. It will be happier there in the long-run, but will take a couple years before it is as floriferous as before. 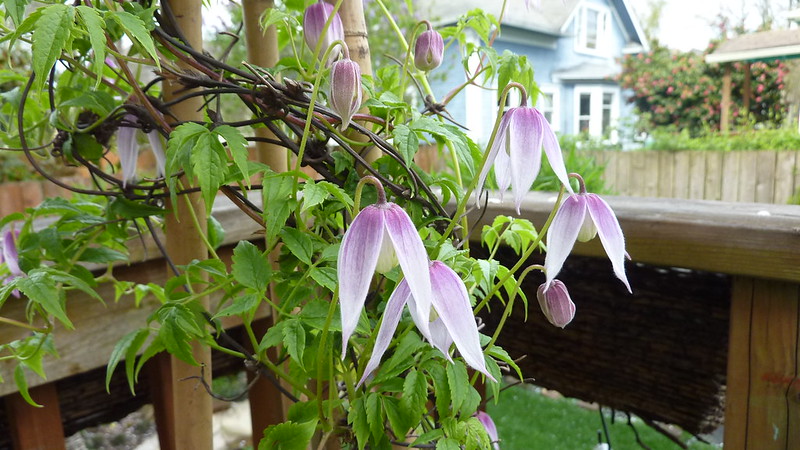 Planted in a container on the deck, just outside the back door, is Clematis Alpina ‘Willy’ — it also blooms early, so on those beautiful early spring days we can open the back door in the kitchen and enjoy it. 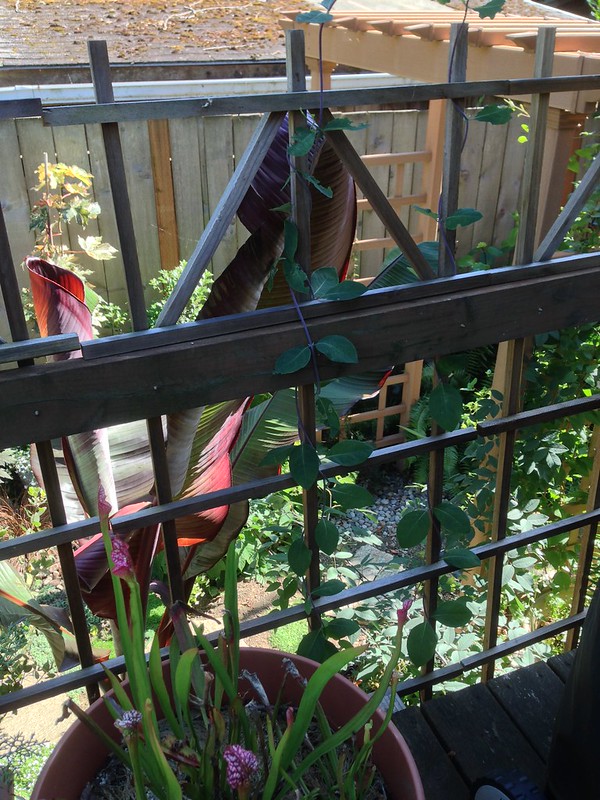 Planted only last year along a new trellis system at the end of the deck (there used to be a staircase here & therefore doesn’t have a railing) is a Lonicera x heckrottii ‘Goldflame’, or a Goldflame Honeysuckle. I hope it’ll bloom a bit this summer as I planted it to attract more hummingbirds to the garden. Something is nibbling on the leaves, but hopefully that won’t be a problem as it gets further established.  In 3 years it should be stunning. 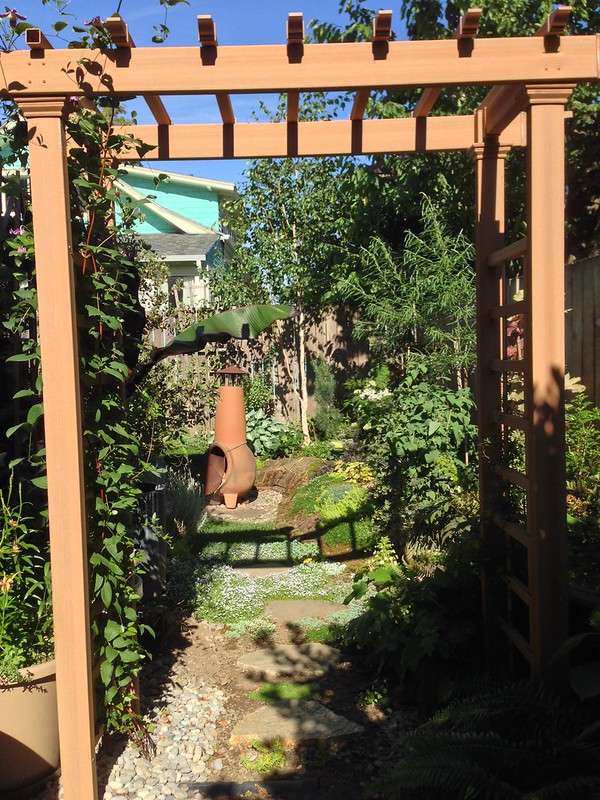 Also near the end of the deck is our arbor. This property, which was ramshackle when we bought it, had 2 rotting wooden arbors and one rusty iron one — so we were reluctant to have any arbors due to our memories of them being less than positive. But this is a composite material made of both wood and plastic, and we’re hopeful it won’t rot on us in our lifetime.

On one side of the arbor we have Billardiera longiflora (in the shade in this photo), sometimes known as Blueberry Vine — it was moved to this spot and is slowing regaining its size and beauty. And on the other side we have two different Clematis: Clematis ‘Rooguchi’ and Clematis Cirrhosa ‘Wisley Cream’. The Rooguchi blooms its purple, nodding flowers in June, and the Wisley Cream blooms creamy white nodding flowers in winter with a bronze cast to the foliage. 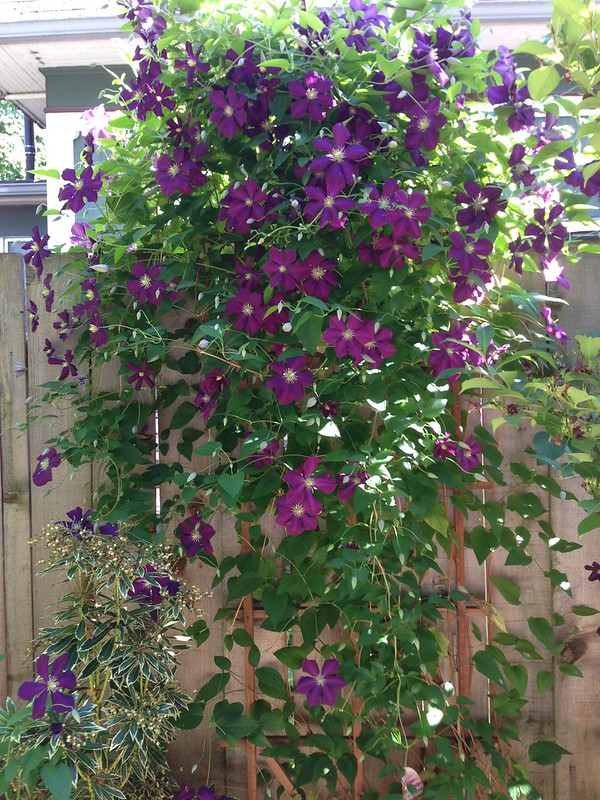 Growing on a fence trellis on the South side is Clematis ‘Etoile Violette’. It has now been here three years and is finally putting on a good show. I added a dusting of wood ash (from the chiminea) to the ground here and that seems to have helped with wilt we faced before. Our neighbors get a great view of this outside their office window. 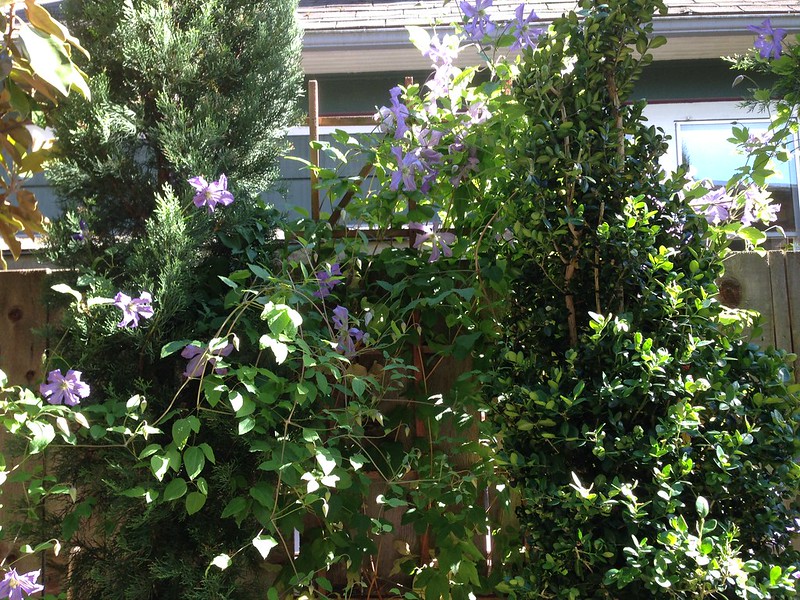 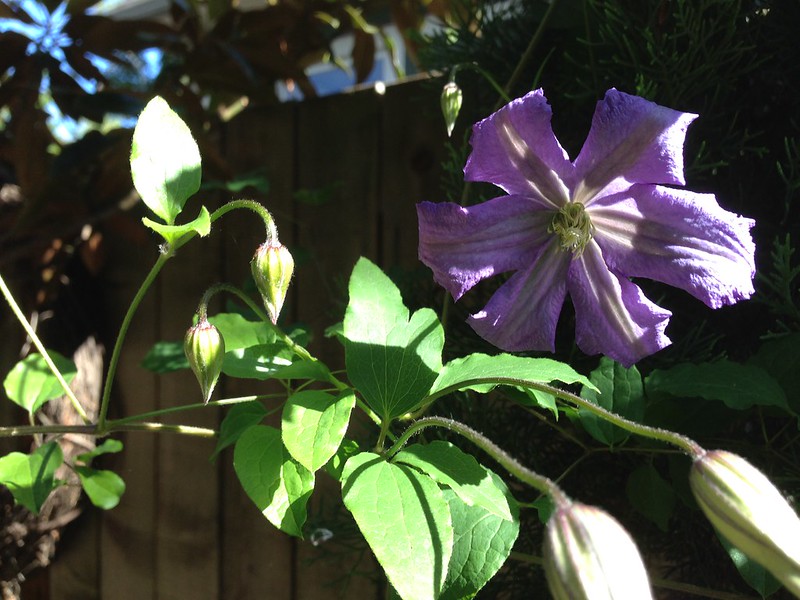 Also growing on a fence trellis (and beyond!) is a Clematis ‘Prince Charles’ — which I enjoy from my office window. It scampers into nearby evergreen columnar trees & shrubs spreading its wealth around. 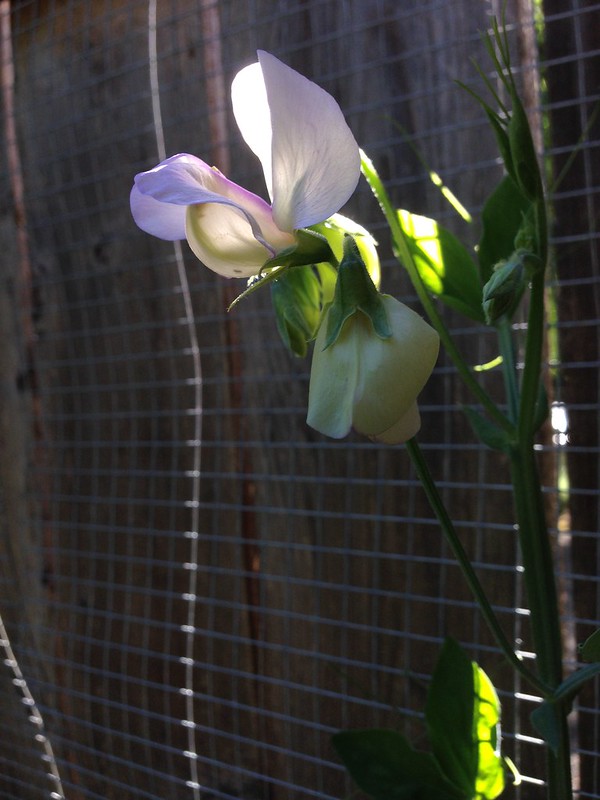 I also grow annual vines, like this beautifully scented Sweet Pea that I add to little bouquets to bring inside.  This one is growing in a large stock tank that we use to plant veggies — it’s sharing space with sugar snaps on the wire mesh. Also, late-summer blooming annual vines grow up our front downspout next to the porch — I’ll share photos of them when they reach their glory later in the year.

Even with all these vines, there are still a couple of spots where I’m looking to add them — there’s one more area available against the fence, and the gate on the South side, which I first designed to be hidden in the fence, will become more of a feature this autumn with the addition of a trellis and arbor.  Stay tuned for more on that.

Many of my vines are Clematis — and the reason is that you can find varieties that bloom at almost all times of year, and they’re generally well behaved & easy to care for.  The same can’t be said for some other vines that are beautiful but high-maintenance (I’m looking at you Trumpet Vine). Clematis comes in just about every color, some are scented, some are evergreen, and they won’t take over your garden while you aren’t looking. And that’s what I want in a vine, or any plant for that matter: easy care and year-round beauty.

Garden Happenings: End of May

Garden Happenings: End of May