We bought this house in foreclosure almost exactly 7 years ago.  There are so many things to love about it, so please read the rest of this post knowing that I’m incredibly grateful for those things and the simple fact that we have the ability to live here.

Along the entire width of the back of the house is a deck.  A terrible deck.  The deck is only 6′ wide.  And when we got here it had THREE staircases leading off of it.  In one case, when you reached the bottom of the steps you were about 3″ from a fence.  It looks directly into the house that is immediately behind us with no privacy whatsoever.  It reminds me of what it would be like to sit on a cruise ship, but without the view.  It’s not wide enough to have a comfortable table for more than 2 people, so while it is approximately 35′ long, most of that space is unusable. 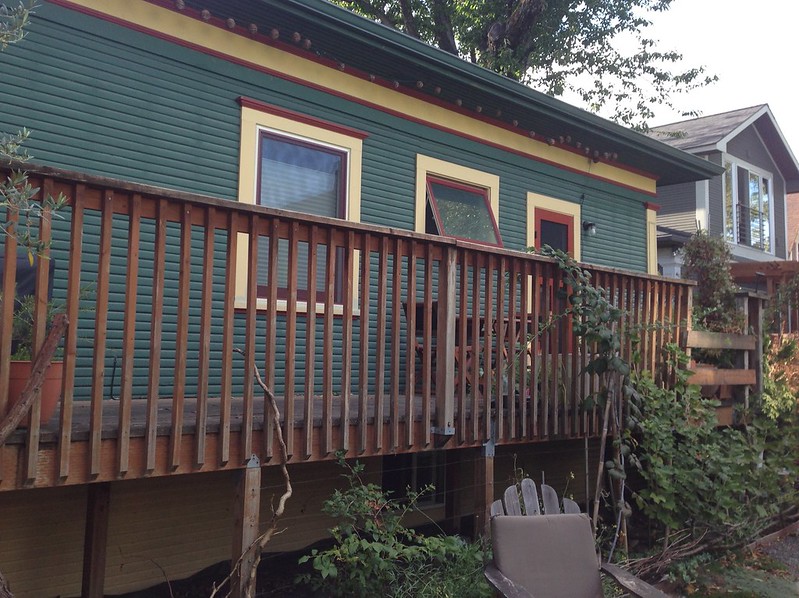 Once you get past the “what were they thinking?!” part, you’re left with a deck that has warping boards, and where the space between the slats is too narrow in most cases so as to trap lots of debris, and which has a slick-as-ice surface when wet unless I get out there and scrub it with vinegar and soap. 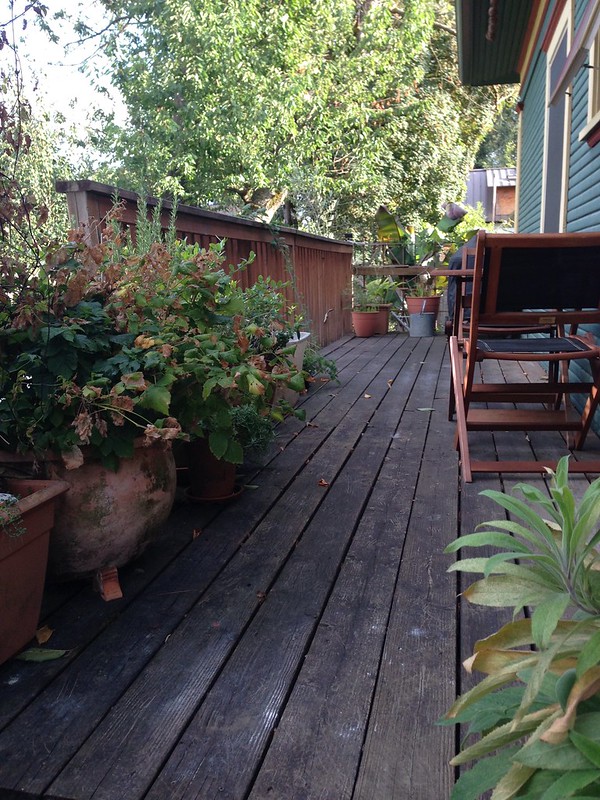 There’s even an inexplicable support post with glitter paint on it. 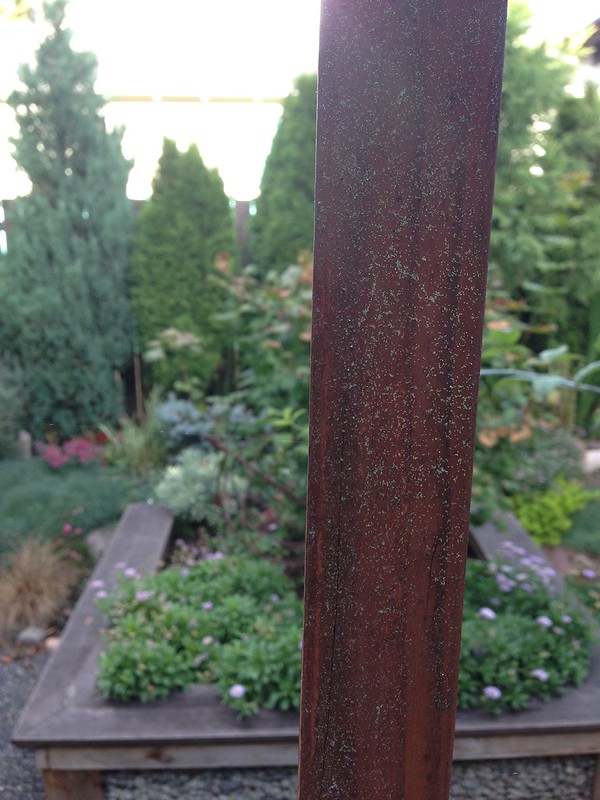 Pretty quickly we removed 2 of the staircases, leaving 1 near our back door.  This gave us more usable space in the garden, but we still have a deck that we can’t really use.  So we keep a grill at one end of it, a small table for the 2 of us for breakfast, and lots of containers, especially herbs since the door leads to our kitchen.  We added some string lights that come on at night and leave it feeling festive.  We made the best of a bad situation without spending too much time on it knowing it’s not permanent. 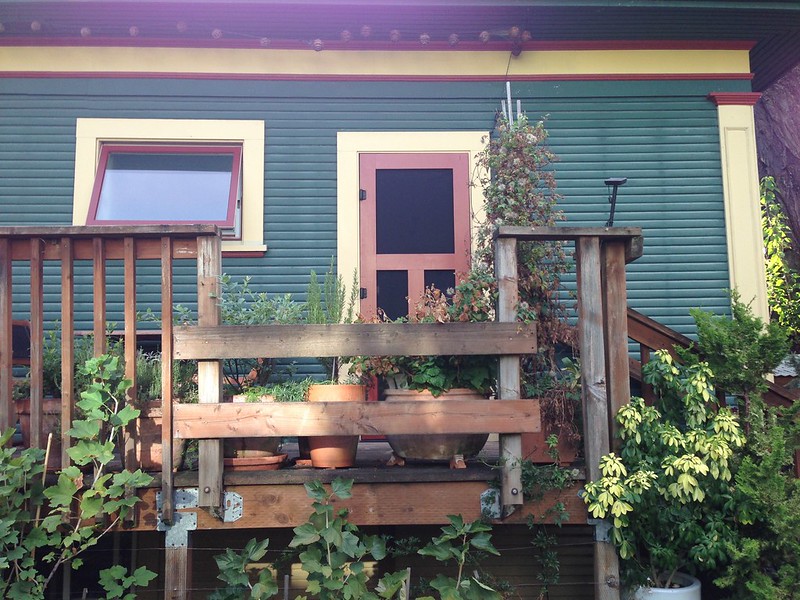 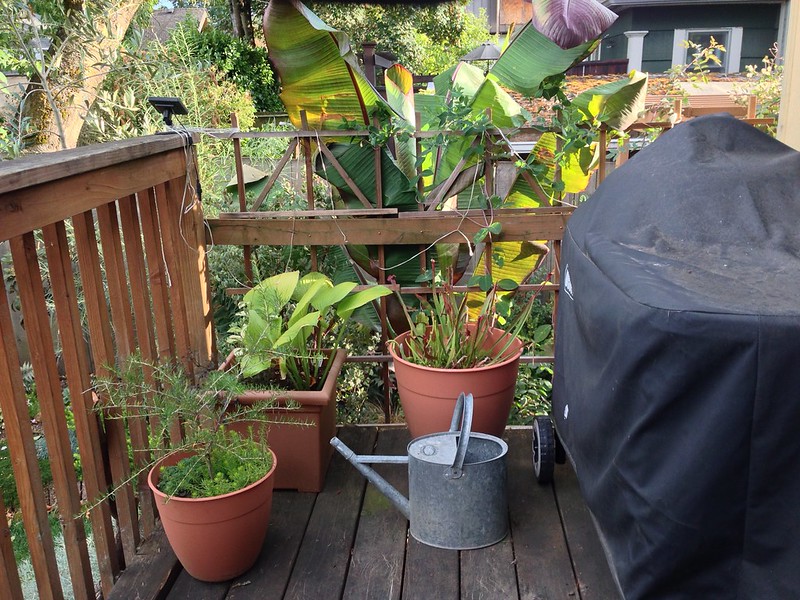 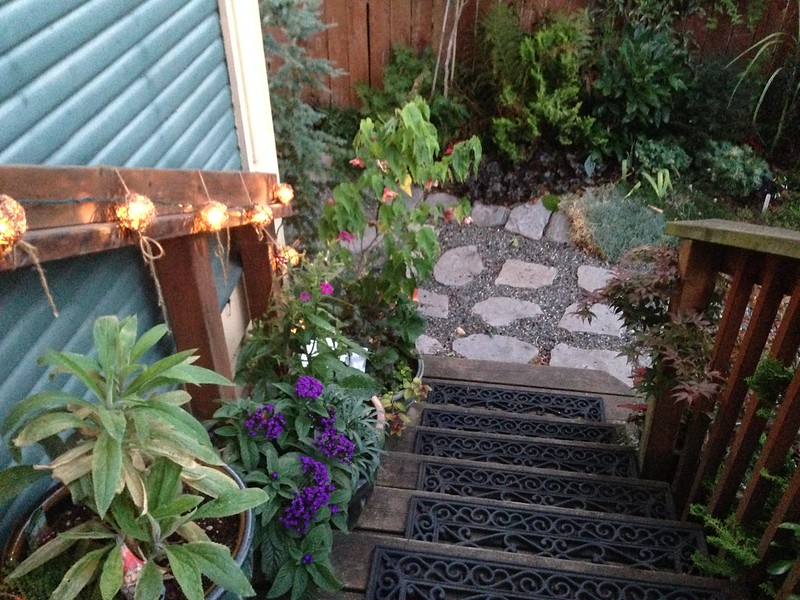 But now we’re getting ready to do a large project with our basement & foundation, and to help with that project, the deck will go.  Rejoice!

At first, to replace it, we’ll just have some simple, utilitarian steps straight down from the back door into the garden.  But once we’re ready, we’d like to create a new, small, semi-covered landing pad outside the back door with steps down to the garden.  In addition, the newly available garden space will allow me to build a garden shed and create a garden design that will work for the space in the long term.   And, for the first time, I’ll allow myself to plant in the ground right up next to the house all the way around — which I haven’t done yet (except for the front) knowing this basement work is looming.

I ordinarily do this kind of thing for my garden design clients in the first phase of design, but I thought it would be fun to do a concept for myself for what the space might look like when we’re through. 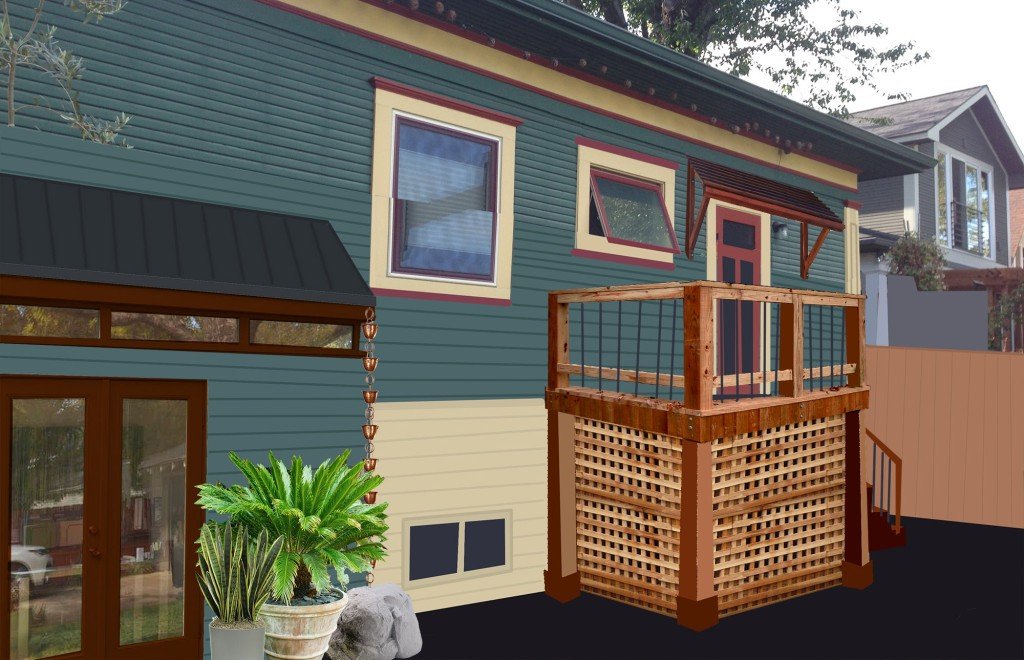 You’ll see that the deck is now just a landing space outside the back door with a wooden awning for rainy days (if we ever have them again).  There’s plenty of space underneath for storage so there would be an access panel in the lattice.  I could even enclose that to keep water out for off-season garden furniture storage.  You’ll also see the new shed at the corner of the house — I’d like to use it for garden tool storage but also to overwinter some plants and as a nice place to do some potting work on rainy days, hence the windows.  I put a few container plants in for color and a rain chain for water management.  These are just concepts, but is something I’ve been thinking about for quite awhile.

Of course, this also gives me room for more planting in a bed between the deck and the shed.  Yay!

Something I will miss, however, is this view over the garden from the far end of the deck. I suppose I could climb up to the new shed roof, but that’s highly unlikely. 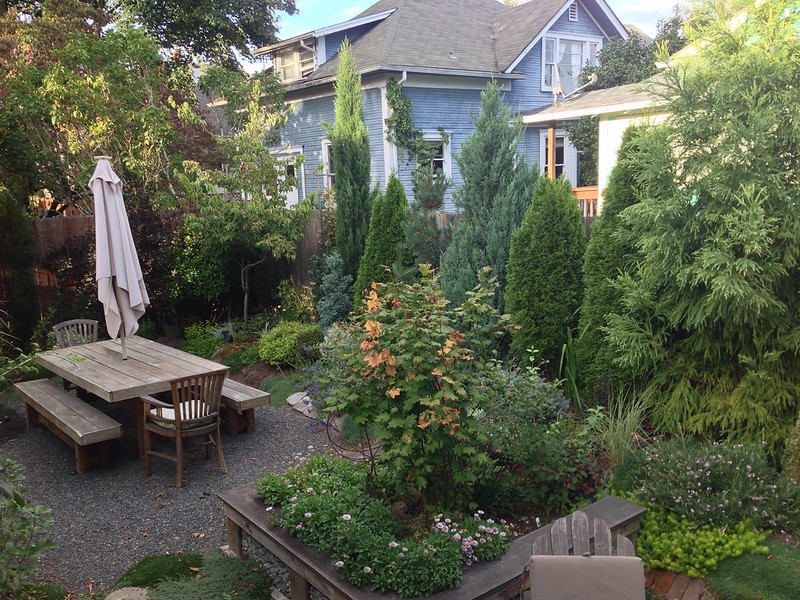