Forget Christmas — this is undoubtably the most wonderful time of the year.  Once springtime hits its stride, which we’ve done a little early here this year, it means that everything launches itself into leaf and bloom, and things change on a daily (if not hourly) basis.

Today is the first day I’ve got tulip blooms in the beds, but well before they were anything but bits of foliage I had tulips blooms in containers.  Often my container plantings are large, mostly perennial plantings with room to tuck a few seasonal pick-me-ups in to keep things interesting.  This is especially true on the front porch, where they’re seen daily as we come and go from the house. 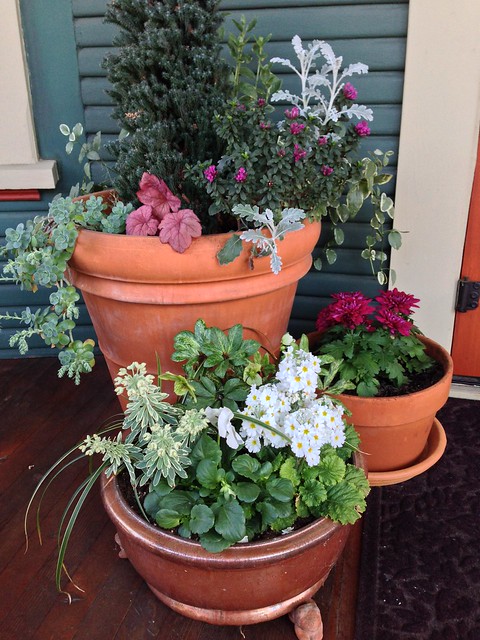 But lately, on top of switching things out in the large containers, I’ve been using smaller containers that I can either move or change much more frequently to bolster the seasonal color.  Seen above is one of a pair of containers on either side of our front door.  They’re anchored by Juniper ‘Red Star’, and also contain a variegated Vinca, some ‘Dusty Miller’, Daphne ‘Lawrence Crocker’, Heuchera ‘Berry Smoothie’, and a sedum I can’t remember the name of.  All of those plants are perennial.

Ordinarily I would tuck in some tulips for color, but this year I added a much smaller pot where I could easily switch out with pops of color on a much more frequent basis without disturbing the perennial planting.  It currently contains some fuschia mums.  I’ve been changing it monthly, and up until last week it had tulips in it.

And on top of that I added a third smaller container that I’ll change out seasonally, using the plants in the garden beds as they are removed.  That container has Euphorbia ‘silver swan’, a variegated Sedge, Hellebore ‘Winter Moonbeam’, a white Candalabra Primrose, and a white Pansy.

I’m liking this setup because if I decide in the heat of the summer that the smaller containers are just too much trouble to keep watered, I can empty them out and put them aside for later in the year, while still benefitting from what’s happening in the large perennial containers.

Last year I planted a perennial front porch container for a client who loves flowers and color, but wanted something especially low maintenance. 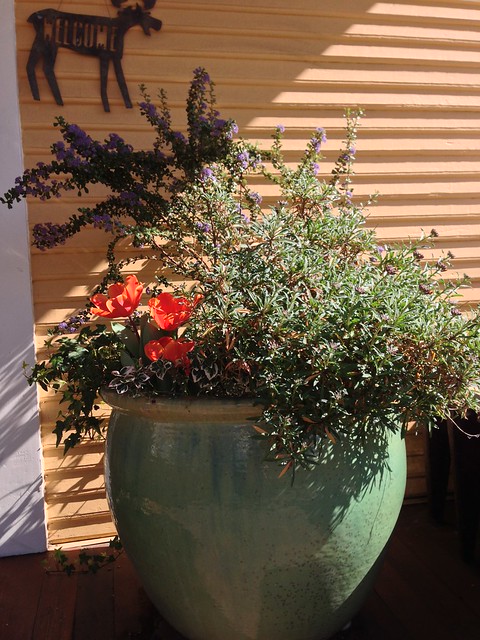 She’s especially fond of a purple-blue / orange color combo, so I anchored her container with a Ceanothus, and added an Erysimum, variegated Euonymus, variegated Ivy, and Fescue.  To give her an early hit of color this year I added some orange tulips. 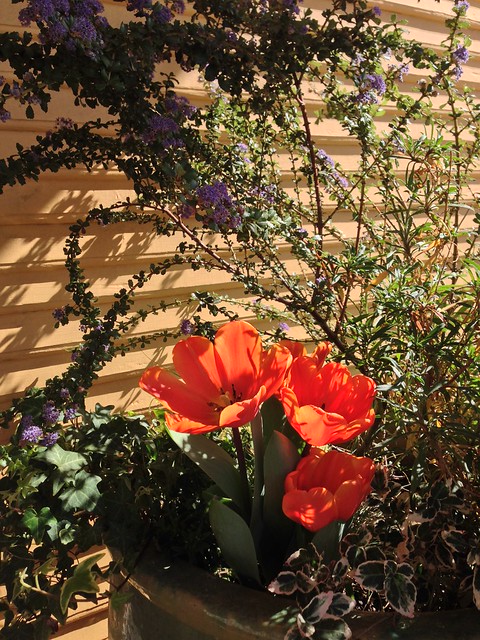 This container rarely gets watered, and thrives in this mostly sunny spot.

Perennial containers can also be much more simple, featuring a single plant, or all the same type of plant. And often they’re the most low-maintenance of all.

On a visit to Portland Nursery at the start of this month, I took photos of two containers that caught my eye. 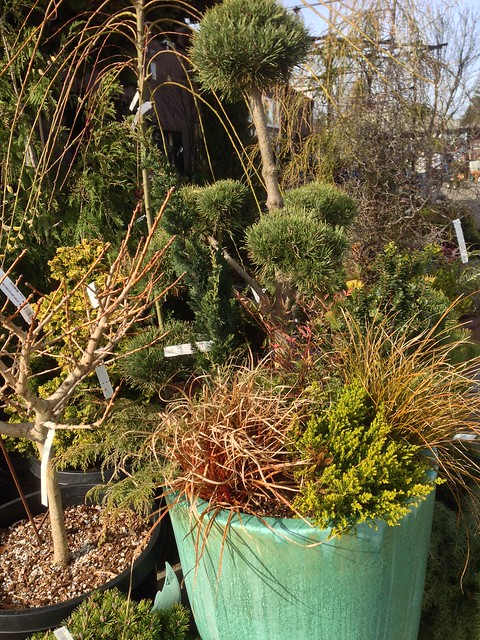 The first (above) not only because the color combo of the aqua container with the tawny sedges is excellent, but also because it’s made up exclusively of super easy perennials plants. 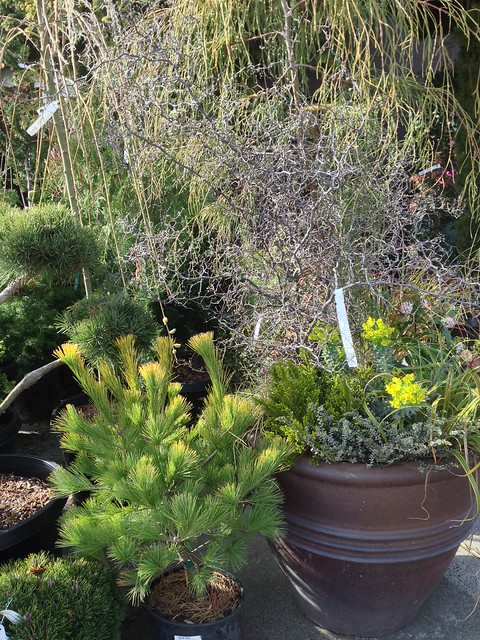 The second, because it’s made up entirely of perennials like Corokia Cotoneaster, two types of Hebe, Euphorbia Myrsinites, Sedge & Daphne. Great for a spot that needs a little oomph in winter but is surrounded by color in the summer when it’ll seem more demure.

As a parting thought for today, I’ll leave you with the photo I took a couple of weeks ago in the border beds in our back garden to kickstart the process of reimagining the herbaceous perennials we’re using there. 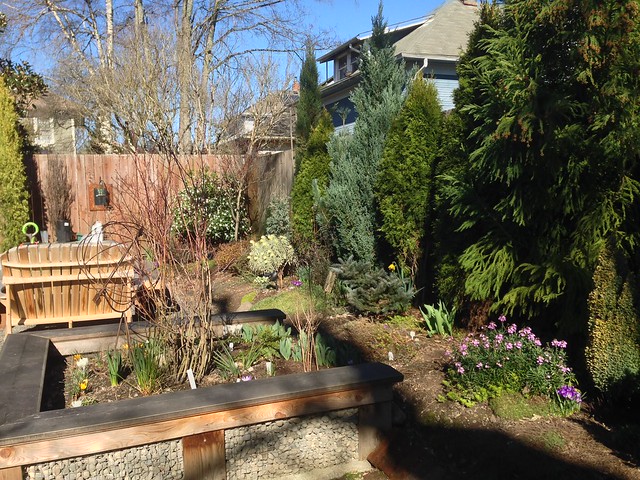 Often a photo is a great way to see things you can’t / don’t see when you’re out among everything. My biggest takeaway from this photo is that our initial investment in the garden’t structure through evergreens, conifers and deciduous trees is really starting to pay off!