What to Plant in Your Hellstrip 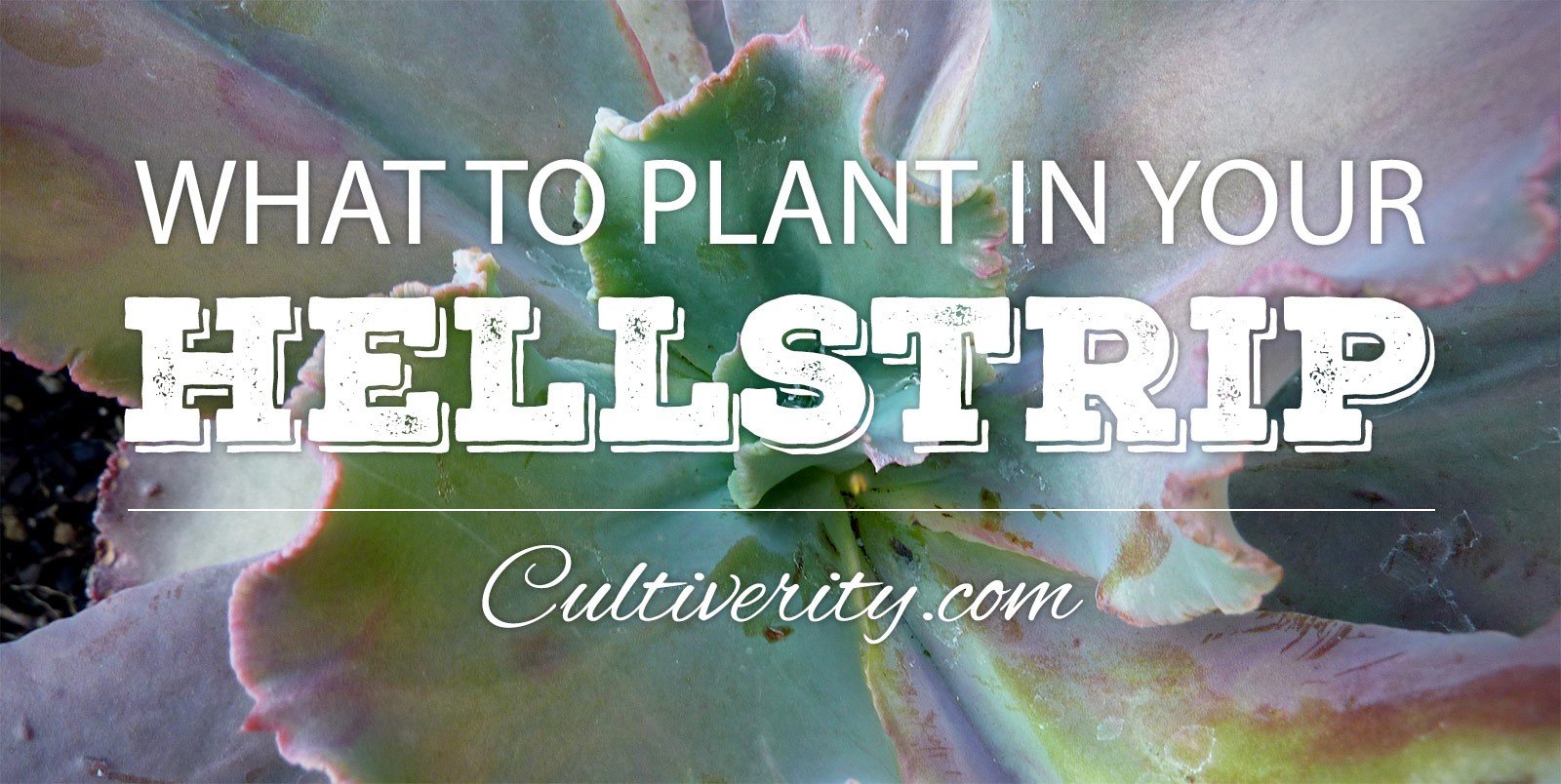 First, I feel like I need to define a hellstrip.  Here’s how it’s defined by Urban Dictionary:

“Strip of dirt between the sidewalk and the street, notoriously hard to grow plants of any kind in due to several factors: lack of water, heat reflected from paved surfaces, foot traffic, trash, dog crap, and salt from winter snowmelt. Also called a tree lawn, inferno strip, devil strip and verge…The term is most often attributed to garden writer Lauren Springer, who popularized the practice of planting tough, drought-tolerant plants (including cactus) on hell strips.”

In my world, I deal with all of the factors they mention minus salt from winter snowmelt. We don’t get lots of snow here in Portland, and when we do, I think there are a total of 1.5 snow plows for the whole city.  Our biggest considerations are foot traffic from cars that park in front of our house for the nearby commercial strip, dog pee, poor soil, lack of water (because I rarely give it any in the summer unless things are really bad), and full, baking sun in warmer months.

Once, while I was gardening in the front, I saw a women get out of her car and step directly into the middle of a lavender plant, firmly squashing it.  She then looked up at me to say a friendly, “hello!” without even realizing what she had done, then she said, “you have a beautiful garden!”  And while I appreciate her comments, I could only manage to stutter out some unintelligible sounds in response because I was so stunned about what she had just done to my poor lavender plant.

This is all to say that you should absolutely make an effort to make your hellstrip beautiful.  To improve your neighborhood, to benefit wildlife, to give you something lovely to come home to, and to benefit your house’s curb appeal.  But don’t get so attached to it that you’ll be devastated when someone steps in the middle of your lavender plant, or when all the neighborhood dogs pee on your sedge, or when it doesn’t rain for months on end. Because all of that, and more, are likely to happen. It’s not called a “hellstrip” for nothing.

But that’s no reason to ignore it or accept it as any less important than the rest of your front garden. Instead, plant it with things that thrive on neglect and tough conditions.  Things that knit together and do well almost no matter what. You can even plant things that might spread a little too aggressively for your liking in other areas, but are bounded by cement in your strip so can only go so far.

What are those plants?  Here’s my list of favorites:

We have a super narrow strip (about 2′ wide) with about 35′ length of planting space, and all the items with a “*” above are planted in it.  So just think what you could do with even more space!  I often do when walking by other people’s hell strips where they have lots more space. Sorry, my little green-eyed monster is showing there a bit.

And if you’re looking to add some height and shade, consider some street-friendly trees.  We have two maples that were here when we moved in, and we decided to keep — they’re still relatively young, but one day will be pretty big — and we look forward to how they’ll make our home feel more established on the street.

Another thing to consider adding: stones.  You’ll want places to allow people to walk on through without stepping on your plants (hopefully) and in larger strips they can help break things up in a nice way.  You can use cobbles or flagstone or small boulders…whatever you like best.  Also, in the winter when there are fewer things happening, they help keep things interesting.

So plant your hellstrip!  Think of it as an extension of your front garden!  Get out there and make the neighbors jealous! Ha!