Managing Your Garden During a Construction Project

By Kate AnchevJuly 30, 2016My Garden's Progress
No Comments

If you’ve been following along, you’ll know that we’ve been planning a foundation replacement project on our house for some time.  As a gardener, I started last year thinking about what plants I wanted to keep that were in the line of fire, and how I wanted to manage them.  I gave away lots of plants, and the ones I wanted to keep went into stock tanks (that we usually grow veggies in) to keep them safe.  And the entire time we’ve lived in this house, knowing this project was looming, I only planted things in the ground next to the house in the front. 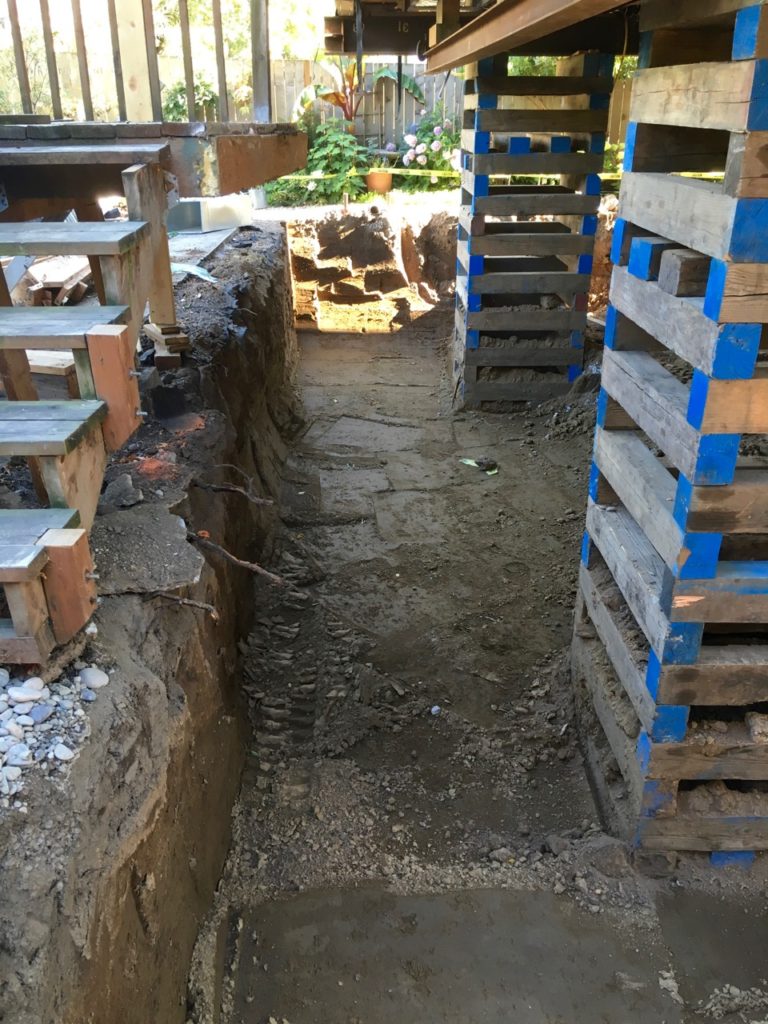 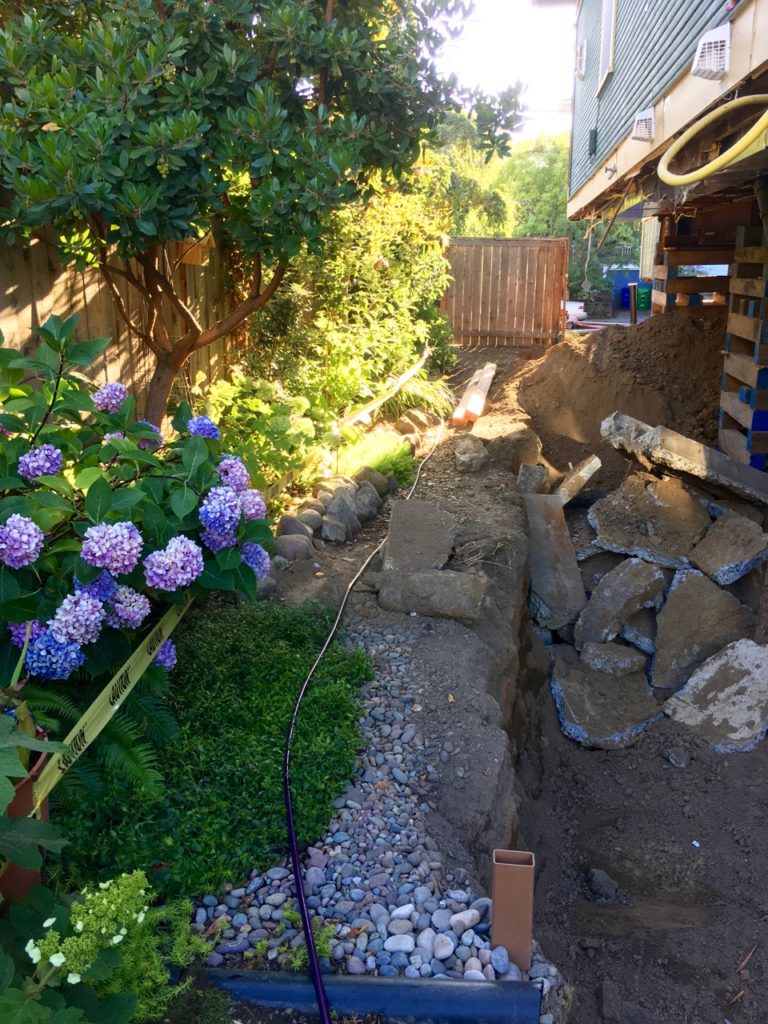 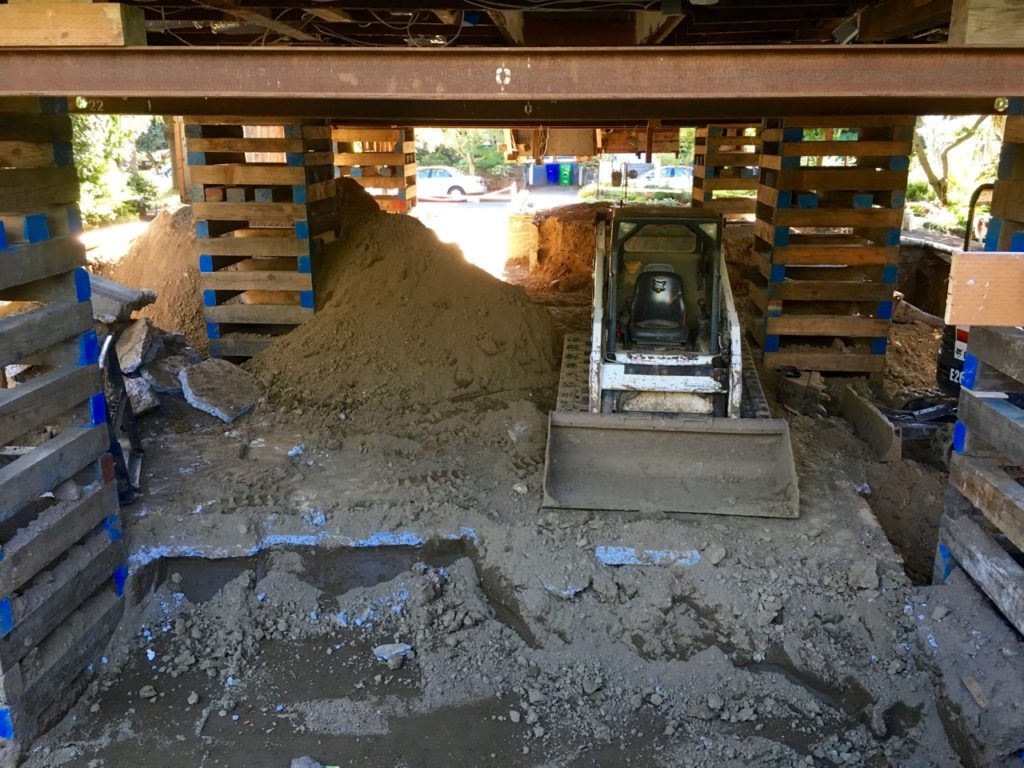 Digging out the slab – they have about 2/3 left

Our back yard became a storage site, not only for plants in containers, but also for things like flagstone, and arbor, our grill (that usually lives on the deck), the rain barrels (that usually live next to the house), and even our washer and dryer (usually in the basement). 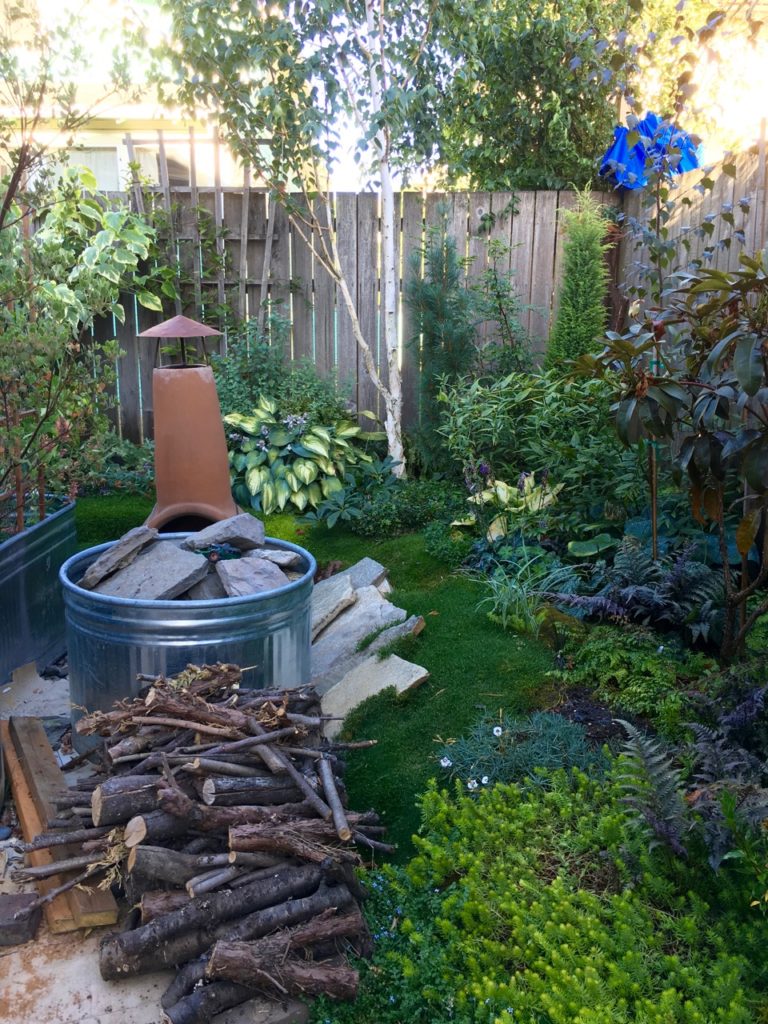 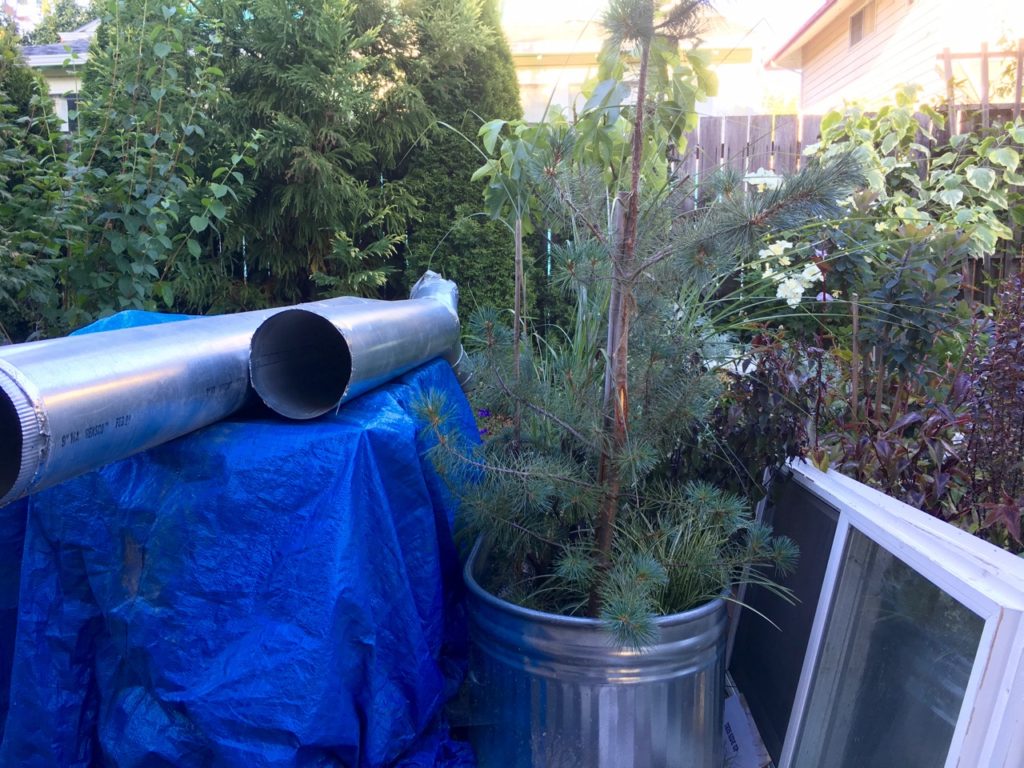 Back yard storage – our washer & dryer are under the blue tarp

I was adamant with our builder that I needed a way to water the garden — especially the large collection of containers — during this hottest part of the year.  He assured me it wouldn’t be a problem, and then a week before we started he tells me, “actually, water will be off for 5+ weeks.”  After lots of panic, and the kind help of neighbors, I had a plan in place.  Our builder then did a 180 and said, “actually, we’ll have a temporary spigot in place.”  I love our builder, but this wasn’t one of our best moments.

So in addition to checking in on the house in the evenings, I also carefully tread up the sides of the house so as not to fall into the sizable hole under the house with the hose to make sure everything that remains makes it through alive.

We’ve had surprisingly little damage so far — we lost a new cistus when the post that holds up the temporary mailbox was placed directly on top of it, and I had a mad dash to remove some plants from the front when the guys with the steel beams needed to use that space asap.  Our young ‘Natchez’ crepe myrtle has a bark wound from a steel beam, but fingers crossed it’ll make it.  And I’m very grateful for that. 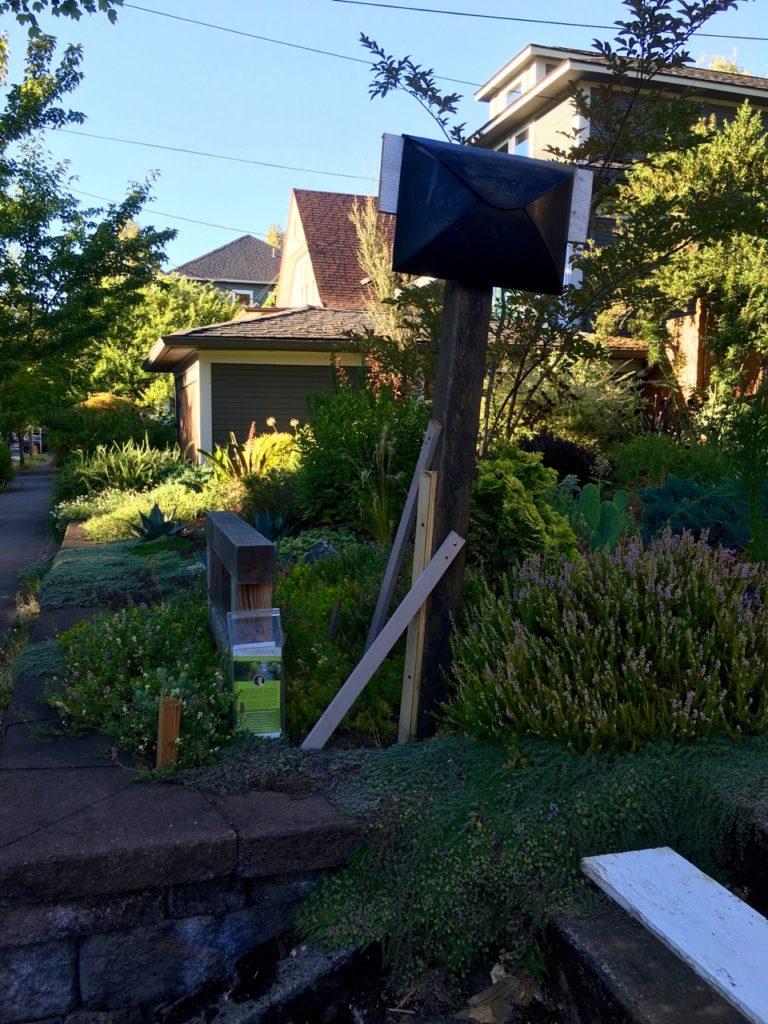 One of the strangest things about seeing the garden this way is that I’d previously thought about the garden as a series of spaces — in front and behind the gate, on one side or another, etc.. — but with the house floating 4′ in the air and the gates removed you can see the entire thing at once as you look around.  It’s given me a new perspective on cohesion in the garden. 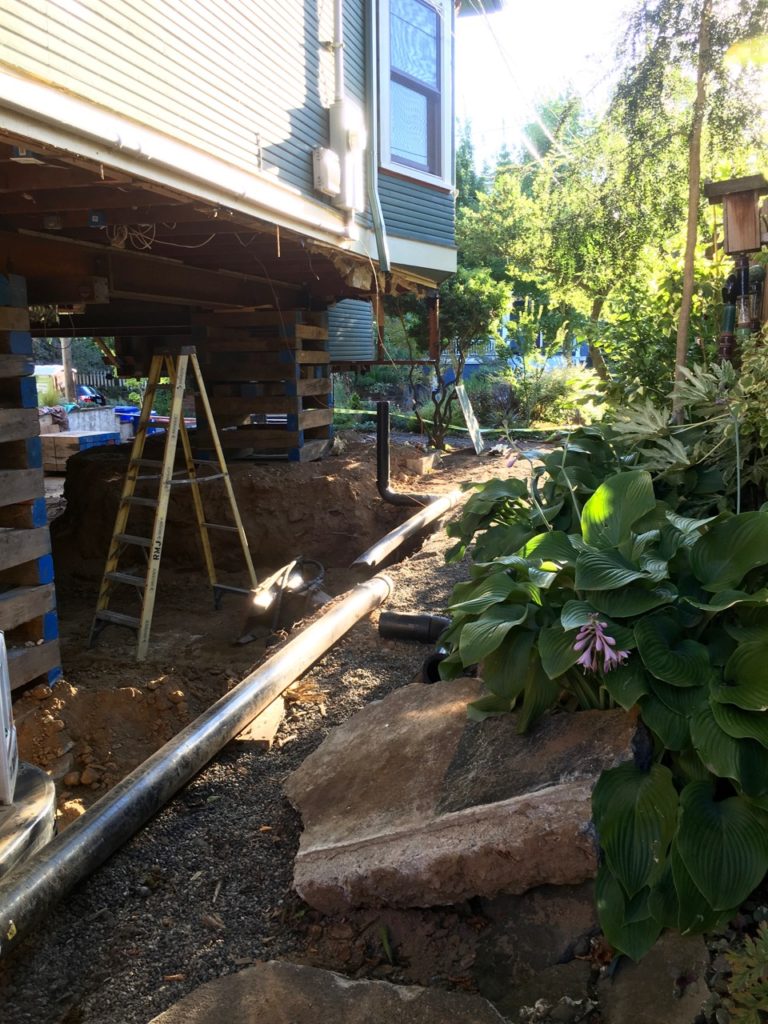 Looking towards the front on the north side 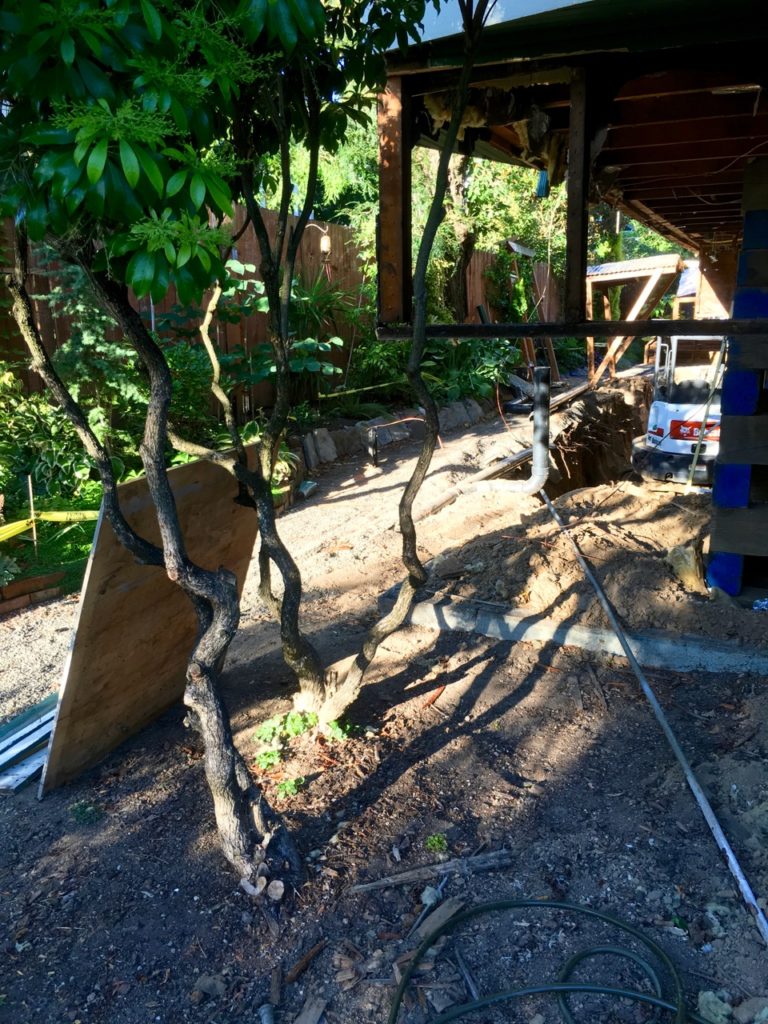 Trying to salvage this pieris

Behind everything that’s happening, the plants are looking great.  A little unruly as it’s very difficult to get back there to do any pruning, but it’s provided some much-needed solace in the midst of everything to see them thriving.  I knew how much I think about our home and garden as a sanctuary, but this project has let me feel the depths of that.  Having your home literally out of reach is bizarre and unsettling.  We have approximately three more weeks before we can move back in, and then a couple of months before we can start to reclaim the garden. 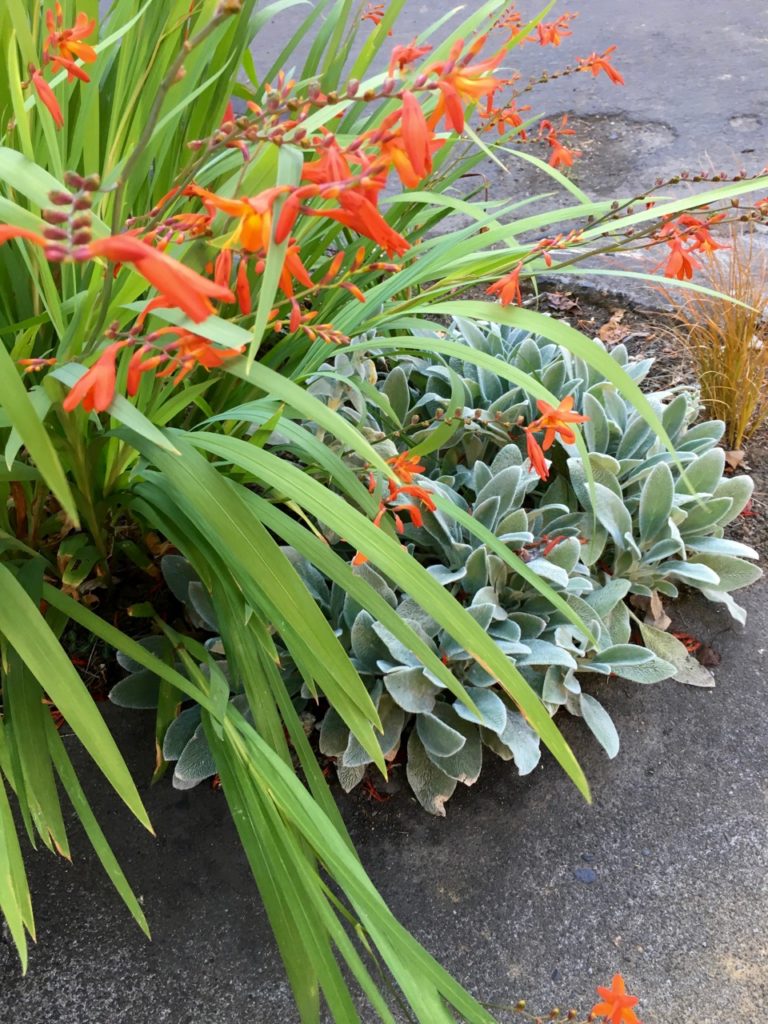 Looking good in the hellstrip 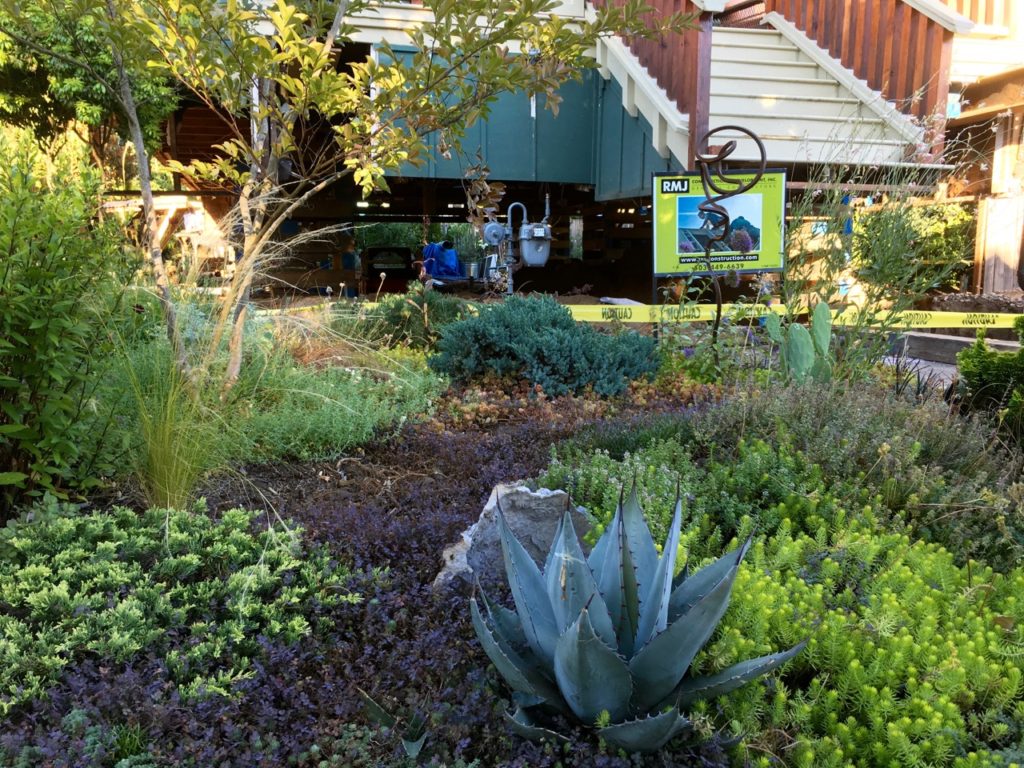 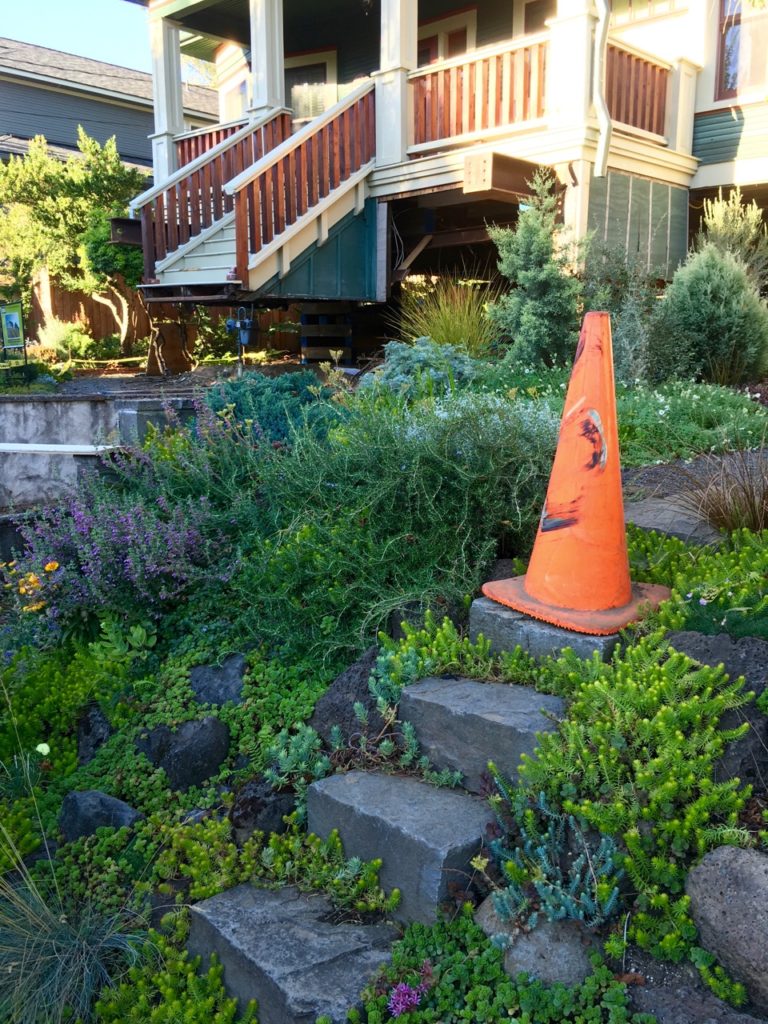 I might plant some structure plants near the house this autumn, and start on the hardscaping, but I likely won’t entirely redo the planting beds until we have the house painted.  I figure that while access is easy, it’s good to get that type of project out of the way.  It make take a little while to refill the coffers enough to do it, but I currently think it’ll be better for my sanity in the end.