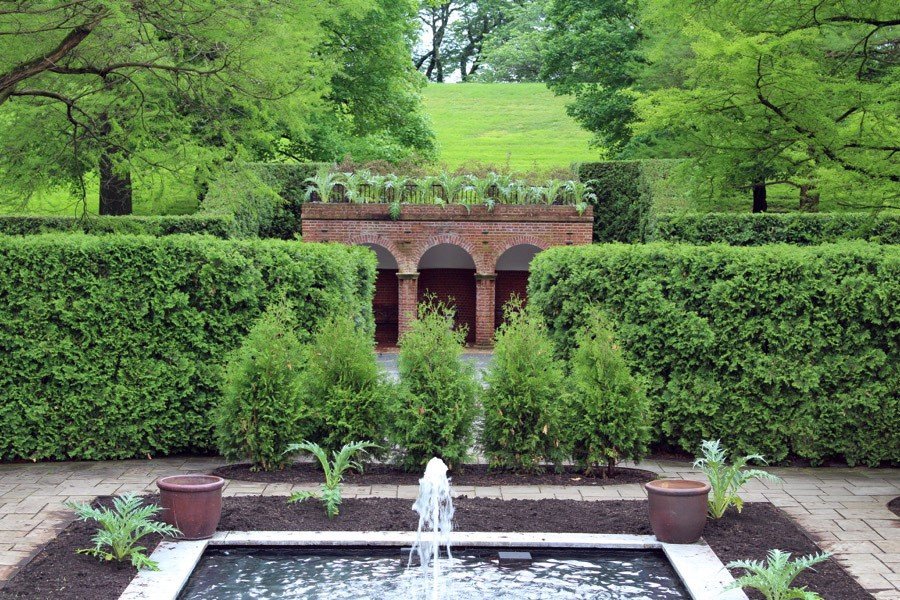 I recently spent some time on the east coast, and one of the things I did was meet up with my mom for a tour of some gardens just west of Philadelphia.  We stayed near Media, PA, which is a cute suburban town where the outskirts have a distinctly rural feel.  My mom and I share a love of gardening, so it was a great way to see beautiful gardens with a partner who doesn’t mind you totally geeking out!

One of the places we visited was Longwood Gardens, in the Brandywine Creek Valley, which is is a huge display garden founded by Pierre S. Du Pont.  Prior to that it was the land of the Lenape Tribe, then farmed by the Peirce family, which started an arboretum there. In 1906, at 36-year-old Du Pont saved the arboretum from logging after it had fallen into disrepair.  After a few years of owning the property, he set his sights on expanding the arboretum to create a place he could entertain friends inspired by his trips to Europe, and particularly Italy.  His showmanship inspired many of the ornate structures and fountains throughout the site, and his vast wealth allowed him to create one of the most spectacular horticultural displays in the USA, including 4.5 acres (!) of conservatory.  Upon has death 1954, the Longwood Foundation (with Du Pont’s foresight), ensured that the gardens had sustainable funding into the future as a public garden.

When I say the garden is huge, I really mean it — it’s over 1077 acres, or 1.6 miles of garden.  We spent most of a day there and didn’t even get to see everything!  But what we did get to see was amazing.  So amazing that I’ll be splitting this post in two — this first one will be about what we saw outside (and also the original farmhouse), and the second post will be only about the main conservatory.

This part of the country had a particularly cold, wet spring, so it had really only burst into bloom in the few weeks before our arrival (May 20).  That meant that many things were happening simultaneously outside, but also that the staff was still busy planting out some of the beds with seasonal displays. 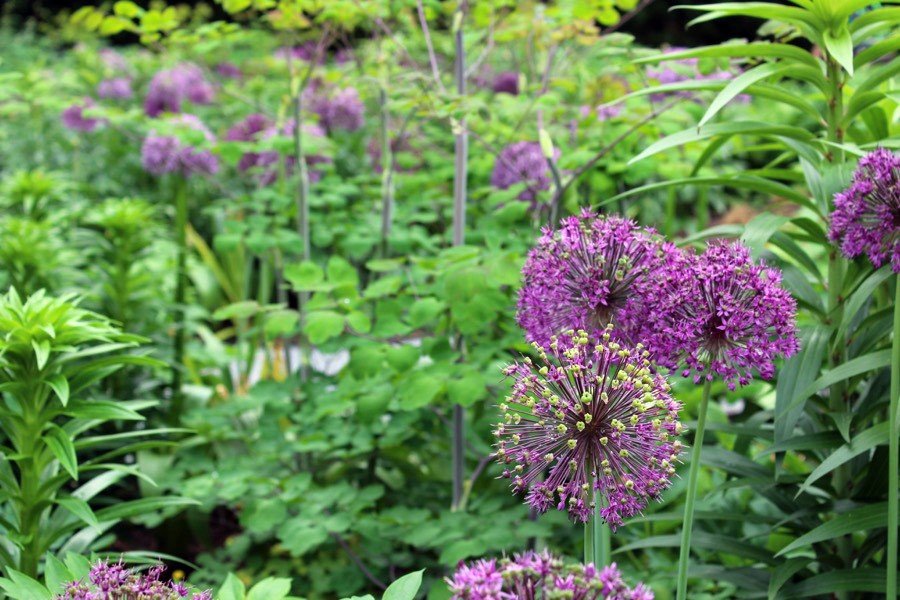 The day we were there was quite warm (and I always forget about the impact of humidity!), but there were lots of shady spots to escape the sun and fountains everywhere to enjoy. 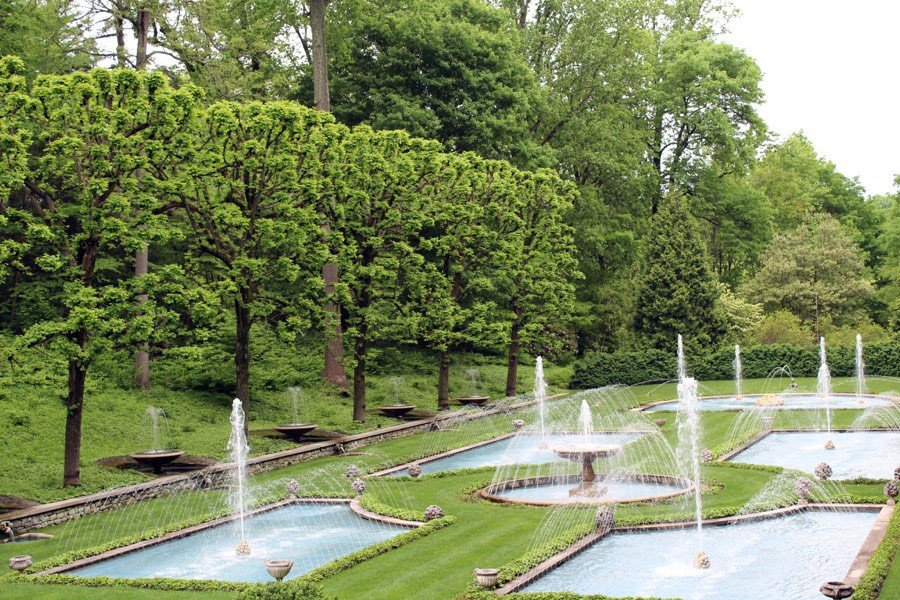 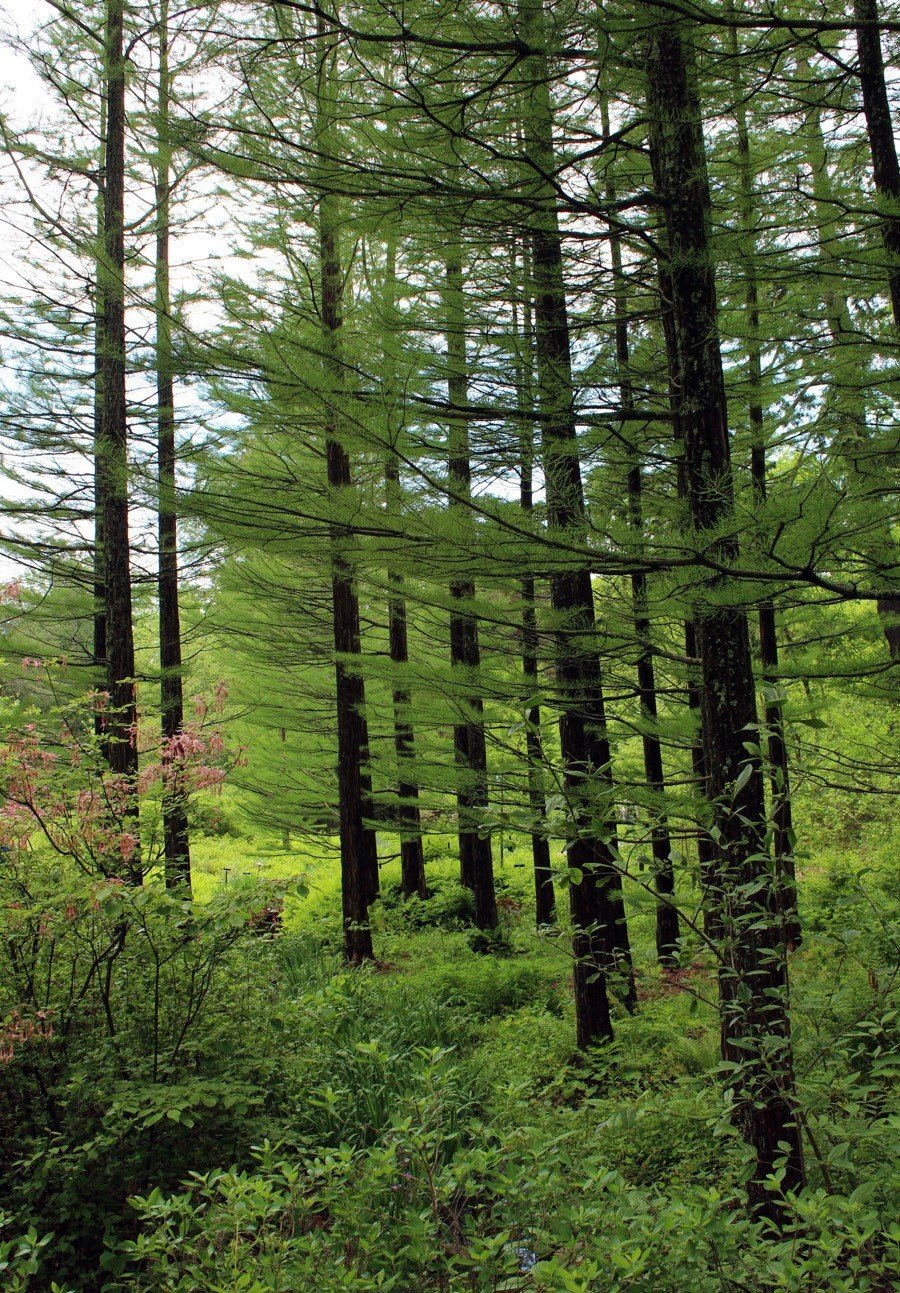 There was a whole garden dedicated to Wisteria with many varieties and various states of blooms. 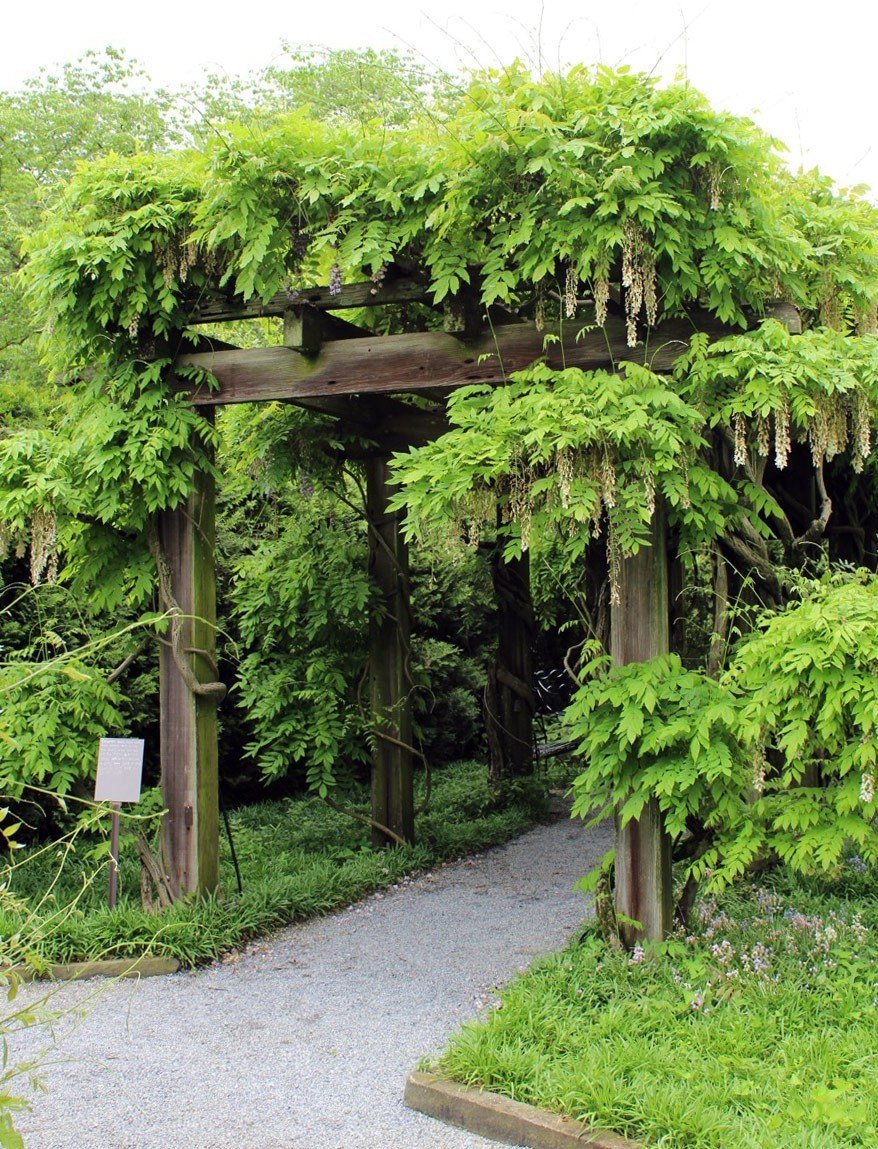 Even the entrances to the bathrooms were planted up with beautiful displays. 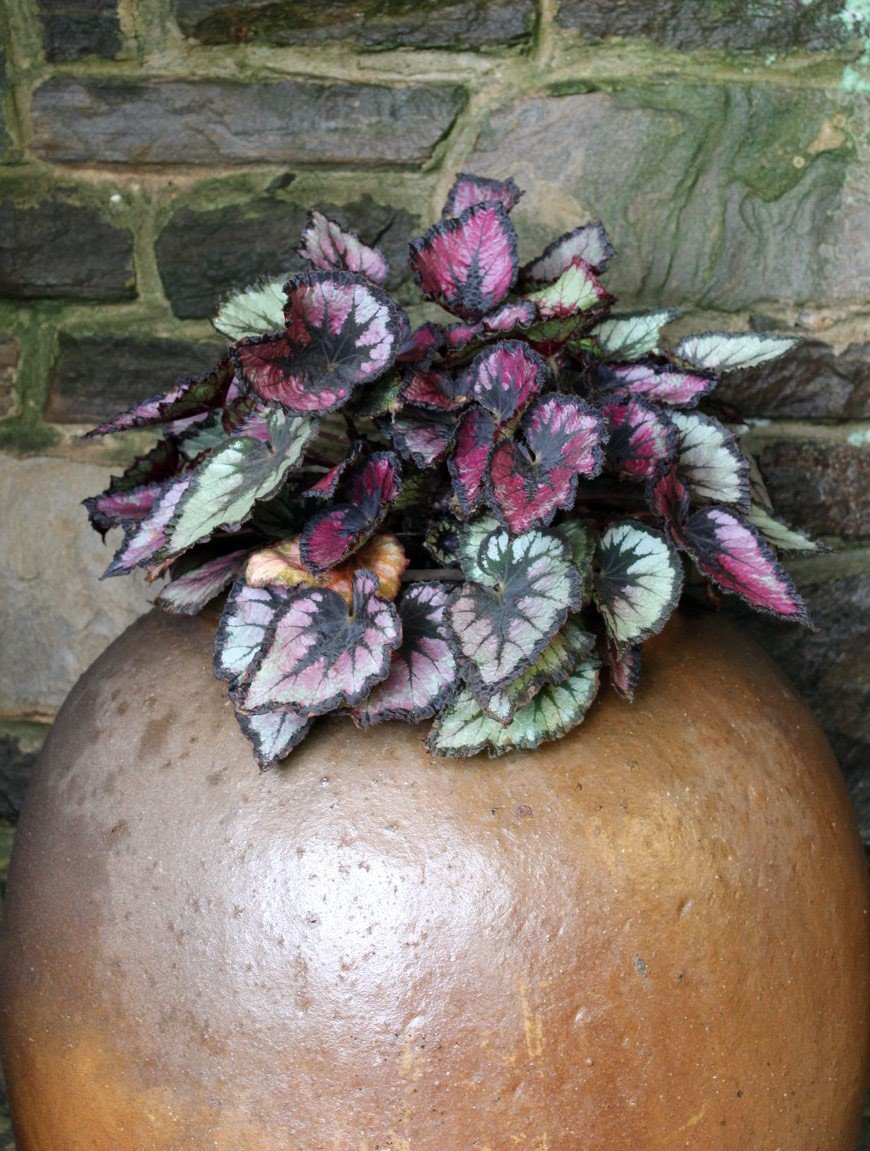 The Sarracenia were blooming and I’m sure they enjoy the extra humidity. 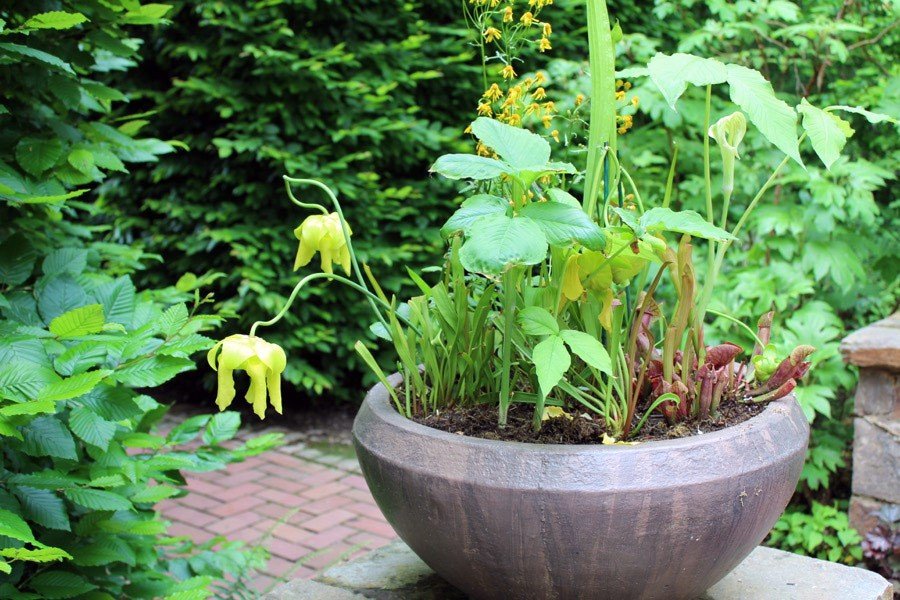 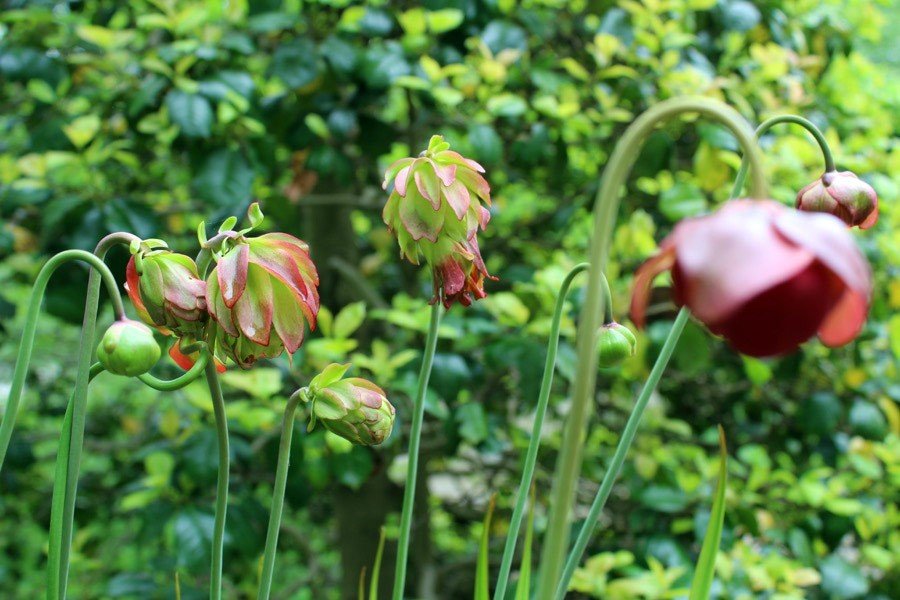 The large pond was surrounded by woodland gardens and laid out so that you could view it from multiple points across the water. 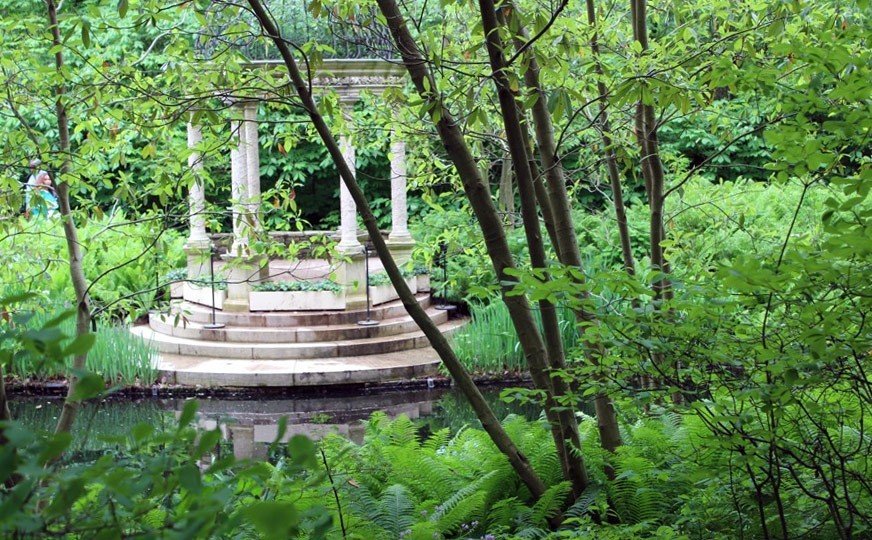 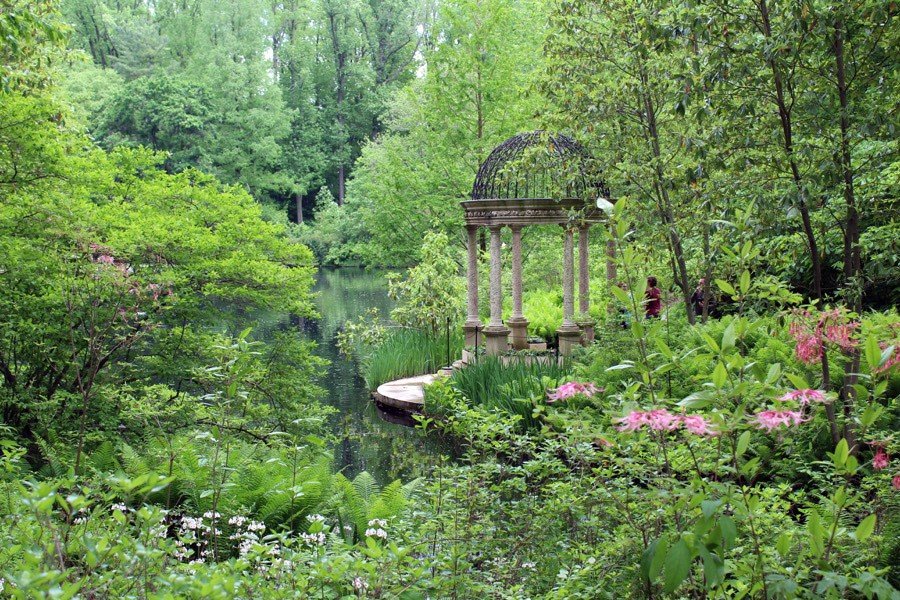 The Cinnamon Fern was having a great moment and looked wonderful in this open glade. 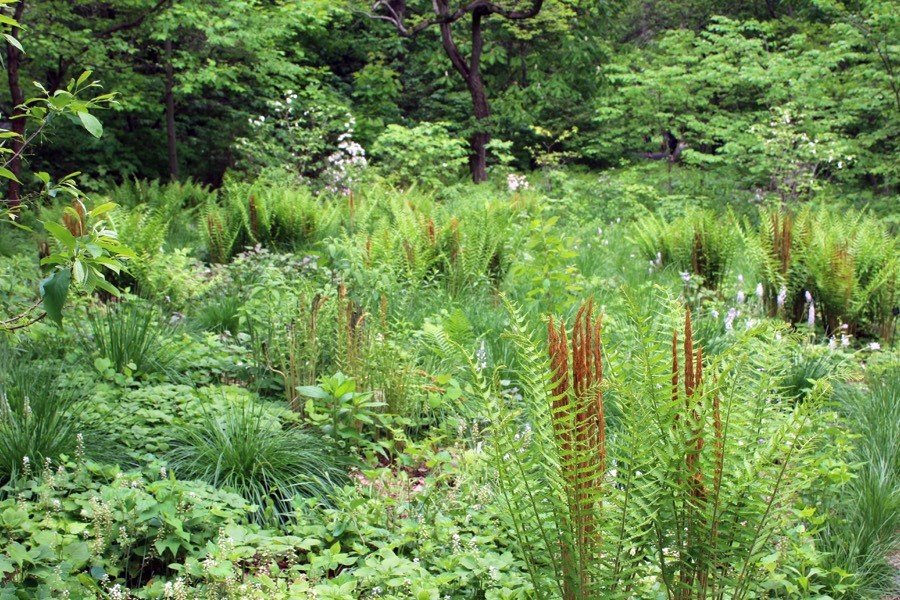 And throughout the woodland I kept catching this amazing scent on the breeze, which it turned out to be Carolina allspice (Calycanthus floridus) — new to me and totally intoxicating.  Now to find room for one in my own garden! 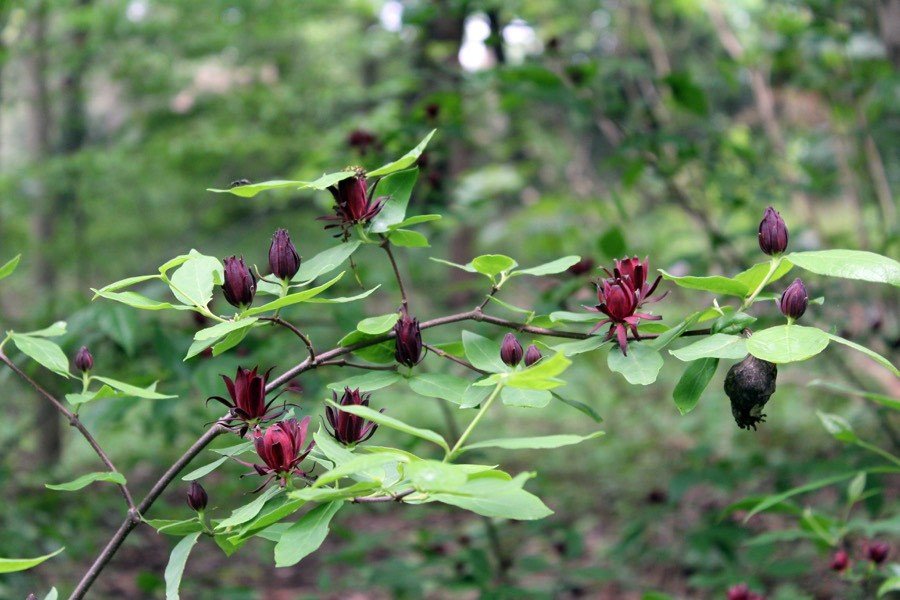 We got to see the original farmhouse of the Peirce family, enlarged many times by Du Pont, including the amazing conservatory added in 1914. 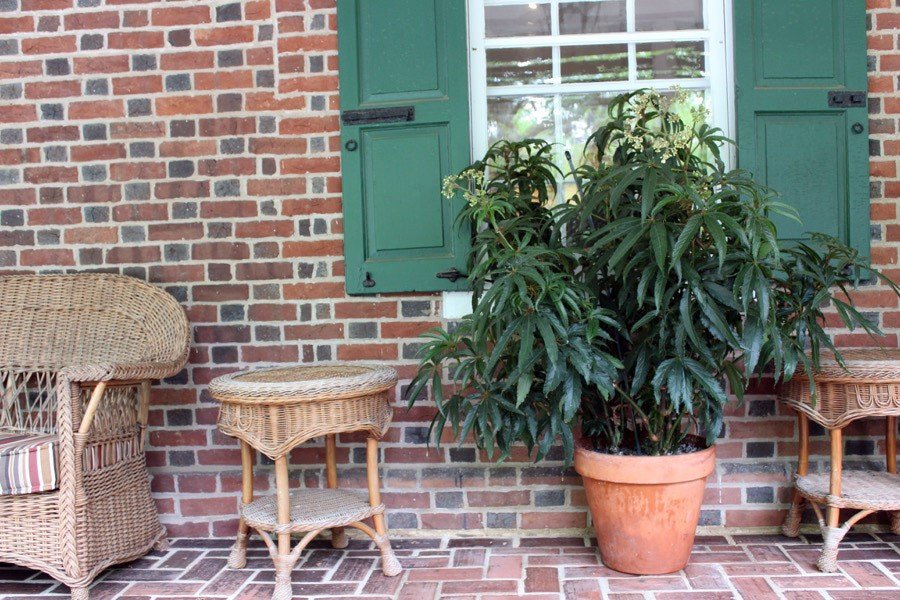 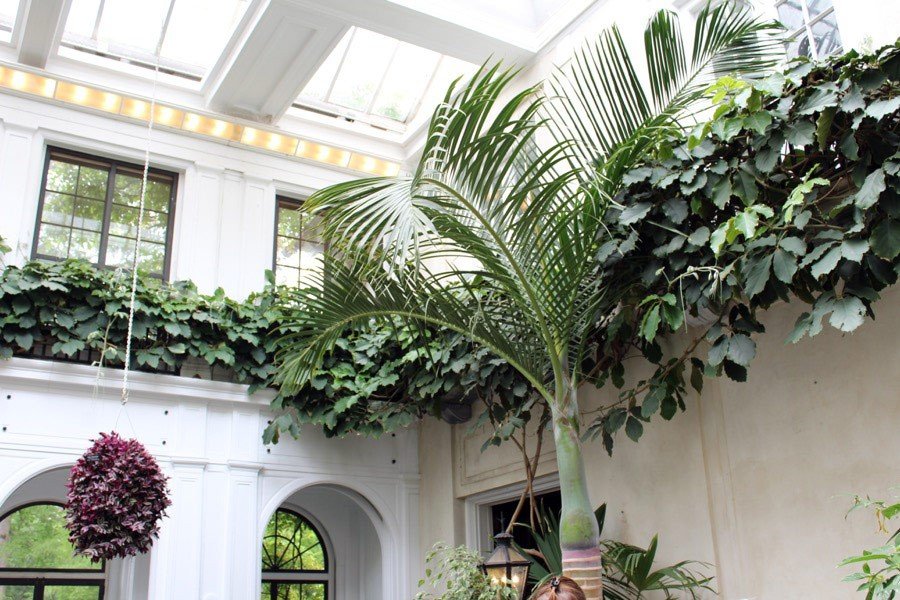 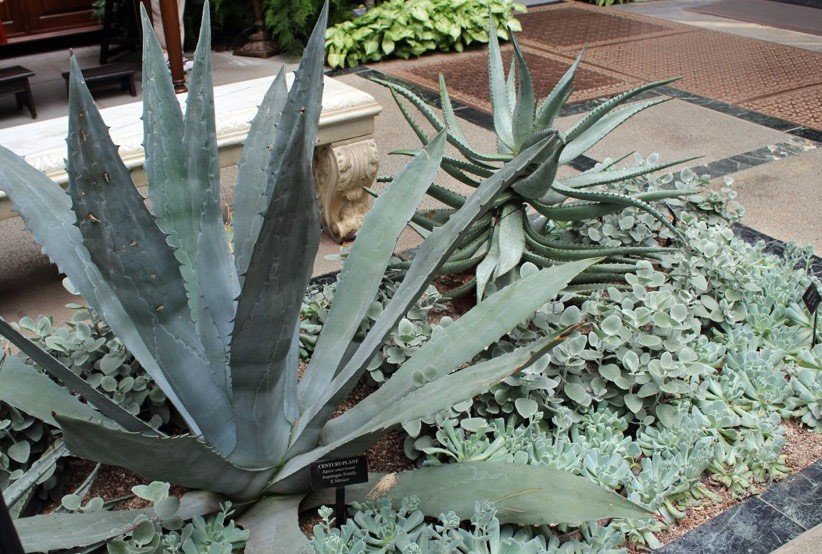 There are a series of gorgeous floor drains throughout the conservatory that add to elegance of the room. 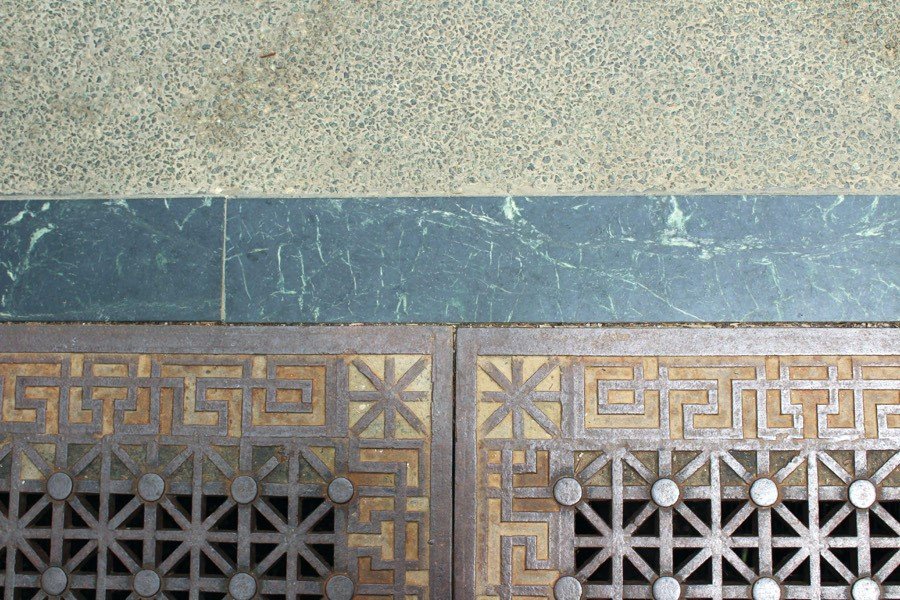 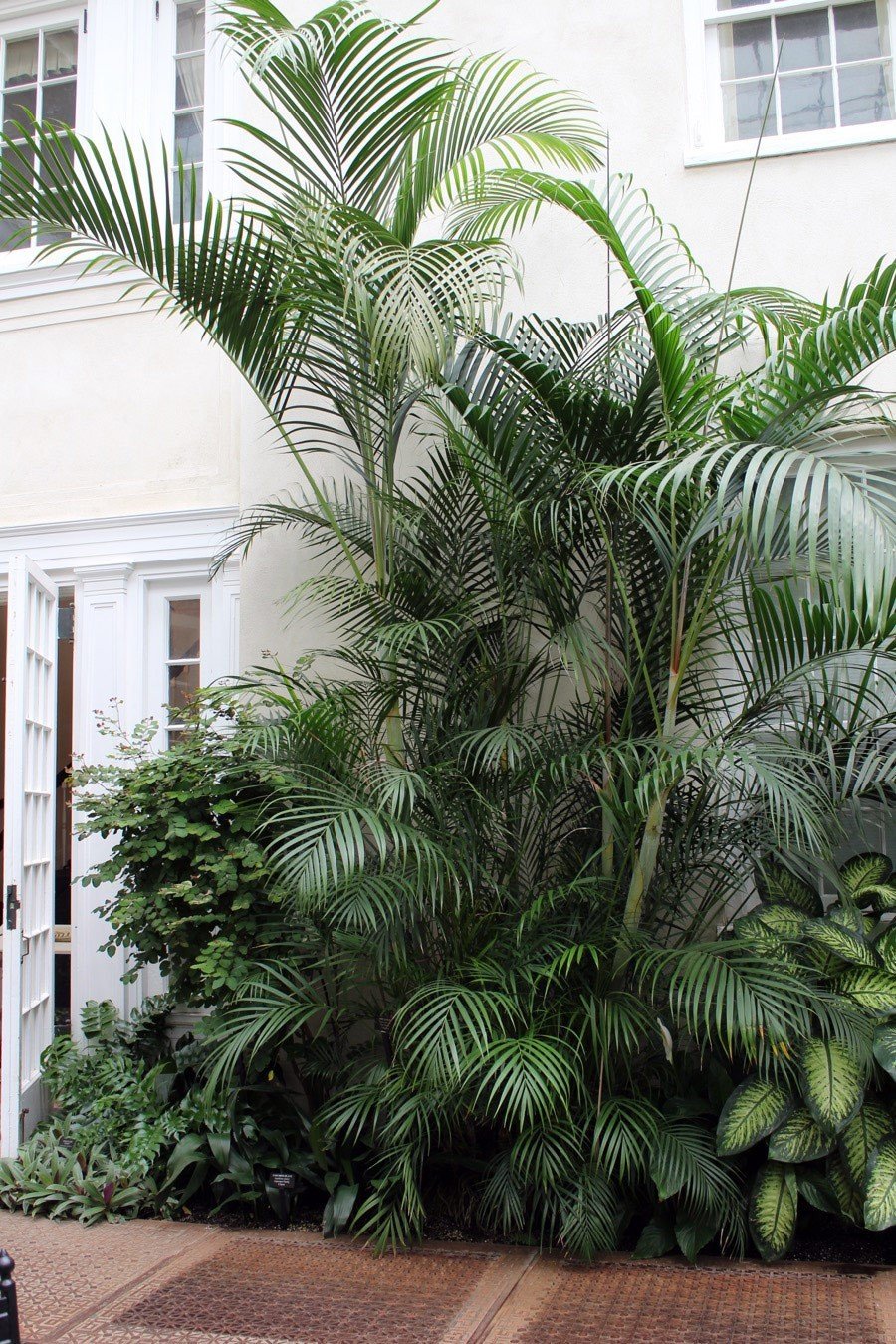 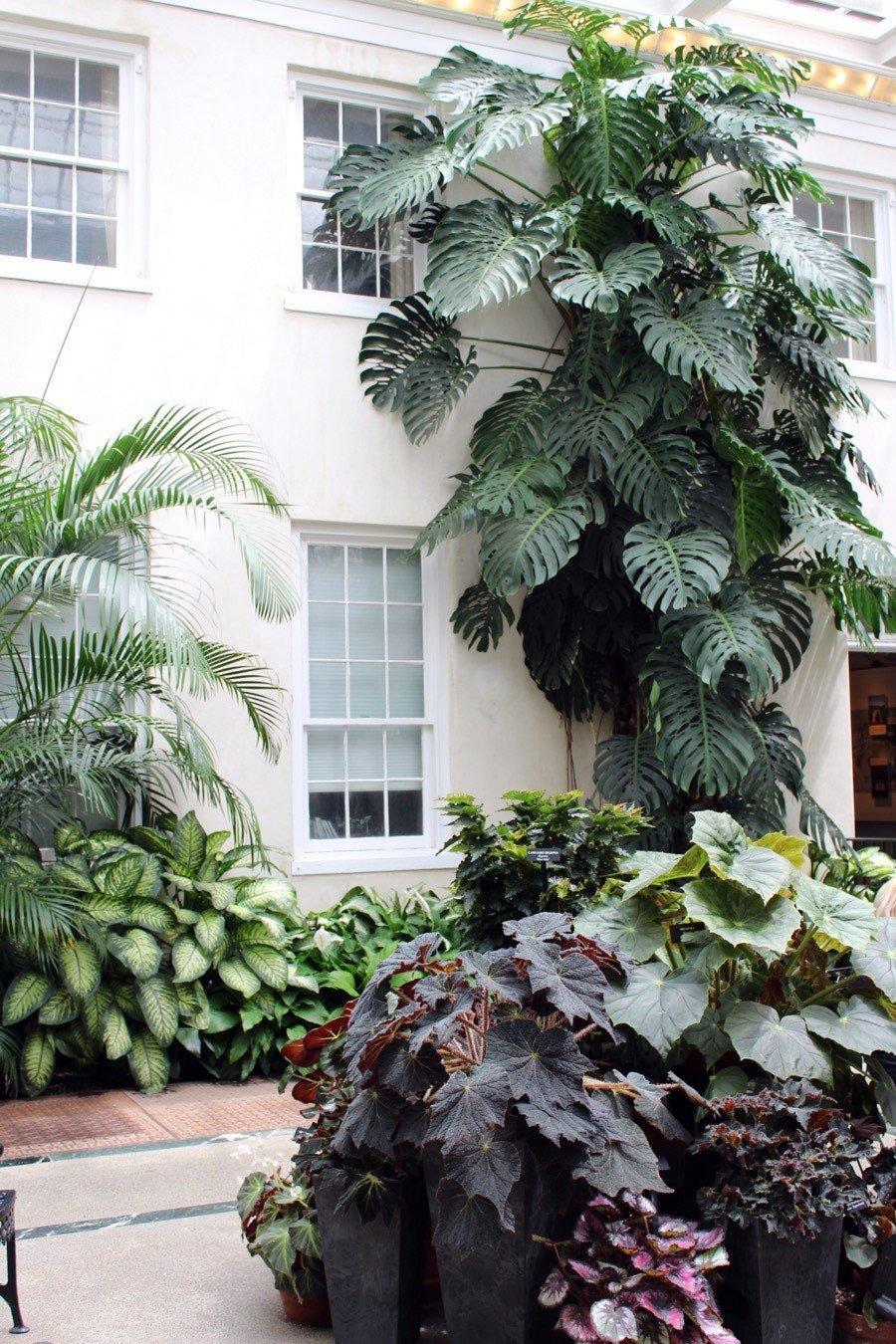 If only everyone could have a space like this to enjoy when winter is getting you down! 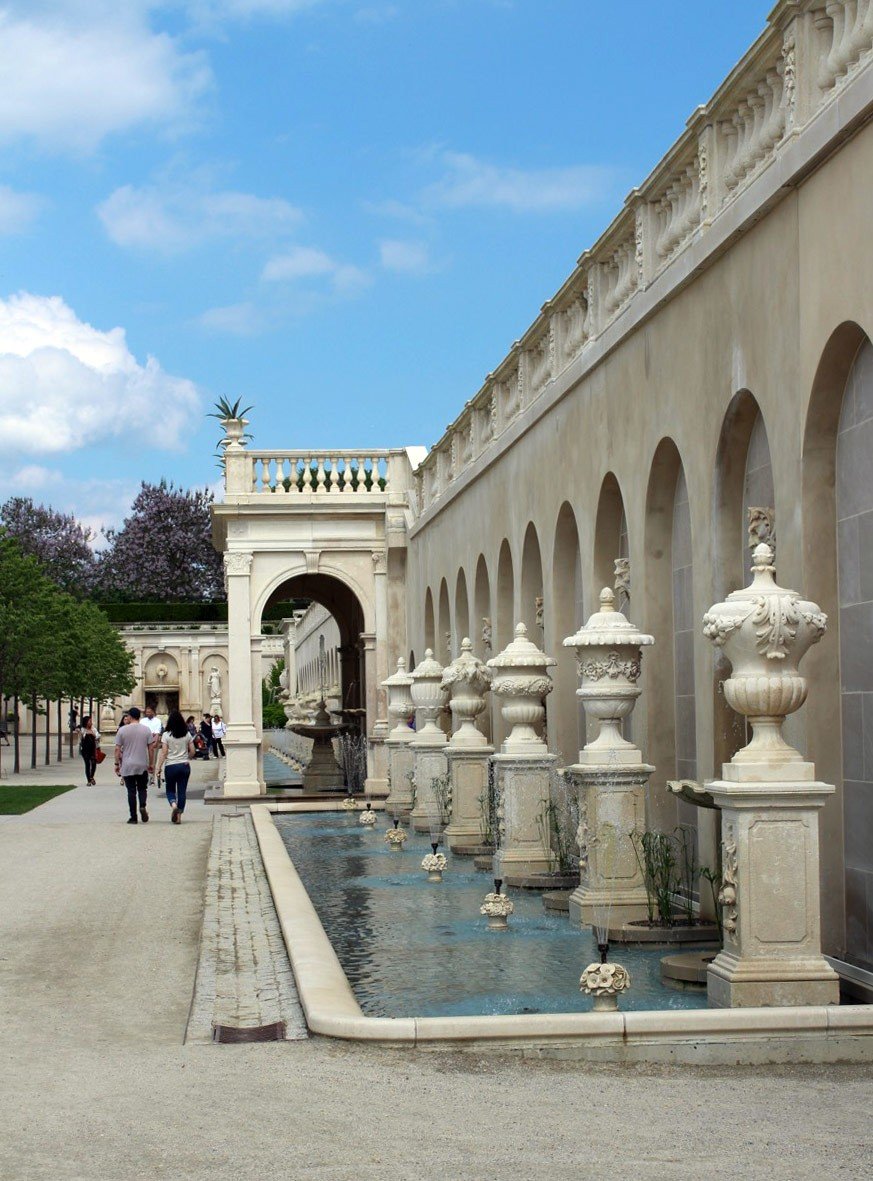 Back out in the open we explored the pump house and its surrounding fountains. 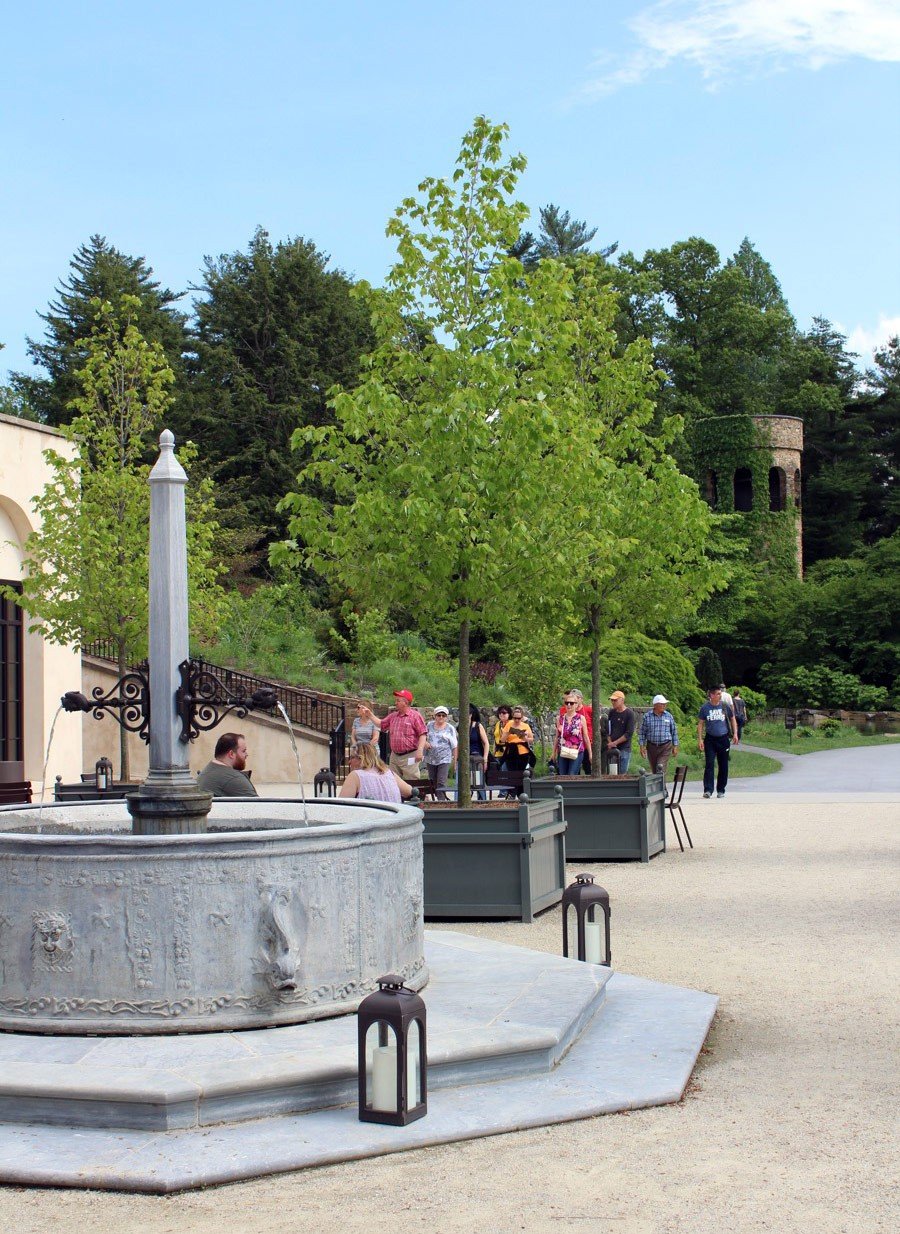 Then made our way to the bell tower, where there was a musical interlude ringing throughout the area. 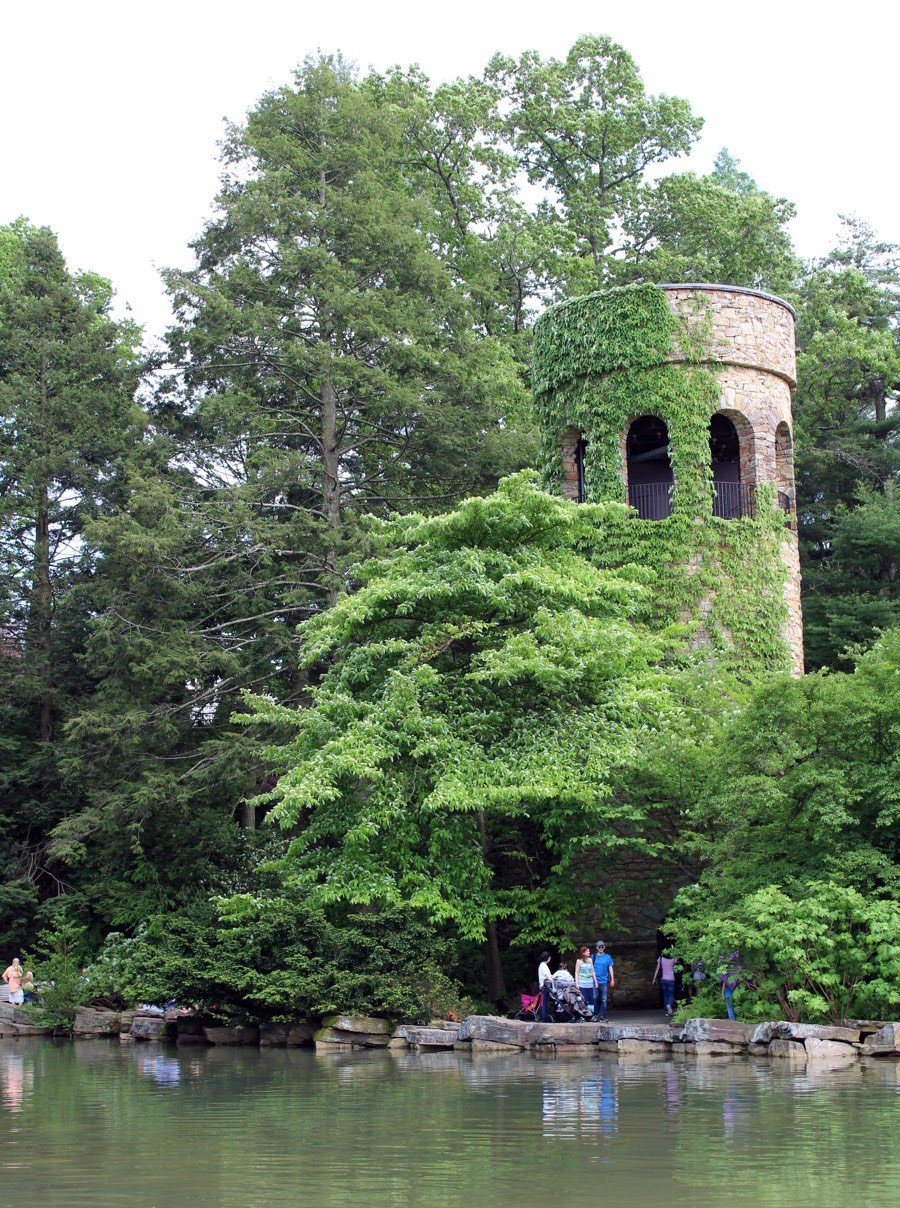 One of the last gardens we saw on our way out was a topiary garden.  You can just make out the main conservatory in the background, which is where we’ll pick up in the next post. 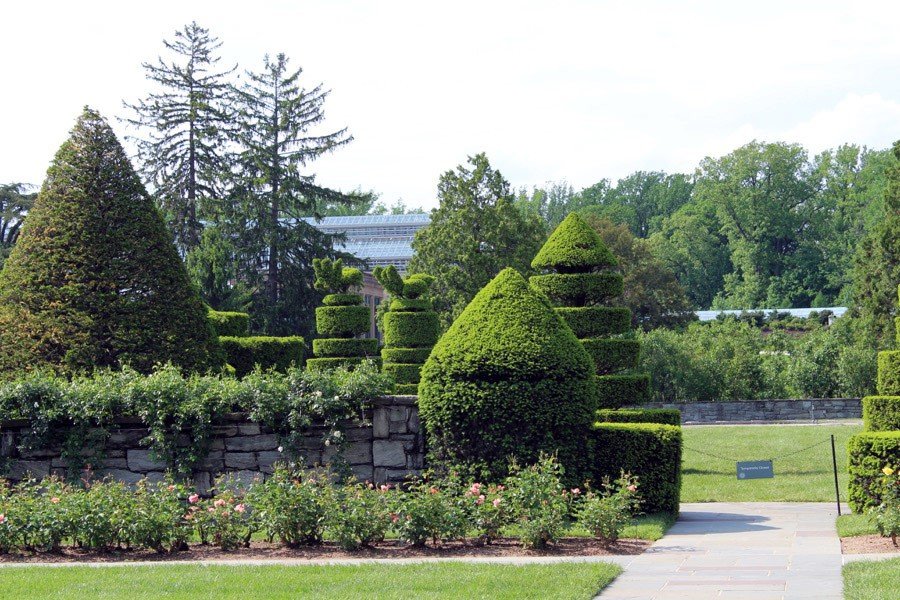 It’s not too much of an exaggeration to say the large conservatory was my favorite of the entire day!  Just walking in there felt like being transported to another universe.  Can’t wait to show you!

The Fear of Missing Out in your Garden

The Fear of Missing Out in your Garden