Like many people who geek out about various things, when new stuff is released that you haven’t seen before (or didn’t know was possible) it’s terribly exciting.  Even more exciting when it solves a problem or fills a gap.

So, for those who are into gardening, it’s always exciting to see the new plants released each year.  Often, they are improvements on old favorites, but sometimes they’re something entirely new & exciting (last year’s digiplexis anyone?).

For gardeners who love plants, these new releases tempt you to go into acquisition mode foregoing your design plan for the delight in having one of the new darlings in your garden.  And I’m not here to tell you not to do that (!) — instead I’m here to share what gets me excited in the coming year.

So without further ado, here’s my list of what I’m excited has been added to the plant catalogs this year for the shade garden: 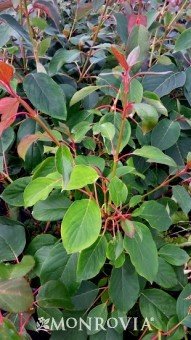 Red Rhapsody® Chinese Hydrangea Vine (Monrovia)
Schizophragma ellipitifolium ‘MonLaBaHe’
“This extremely rare selection from the Dan Hinkley Collection has varnished-red new growth that is stunning in spring. Its flowerheads are surrounded by large, cream-colored bracts. Six years ago, Hinckley was driving through a remote area of the southwest Sichuan Province when he noticed some seedheads on a plant. When the seedlings were two years old, he realized he had a rare species that, to his knowledge, has never been successfully grown in Western cultivation. ‘Red Rhapsody’ will self adhere, reaching 10 to 15 feet, and is best grown on the trunks of sizable trees, fences or arbors in shade to part shade in evenly moist soils. Hardy from Zone 6 to 9.”  Learn more on the Monrovia site…

I like this because it has a few characteristics that make it perfect for urban gardens: multi-season interest, compact size, and vertical interest.  We have a climbing hydrangea heading up a huge cherry tree on our property line — that tree is so big that we only see the large trunk from inside the house, and it’s growing in the relatively small space between us and our neighbors, with the boundary fence installed around it.  The vine allows us to have something interesting to look at from our kitchen windows besides the monster trunk, and in the warmer months provides additional privacy.  It won’t harm the tree on which you grow it, is well-behaved, and adheres itself so that you don’t have to do any staking.  All that and the bright new growth on this new variety make it a great plant. 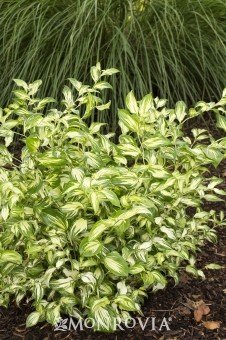 I admit to a weakness for variegated plants.  I live in the Pacific Northwest where we have cloudy, relatively dark days for much of the year, so things that light up the garden, especially shady areas, are bound to impress me.  Shiny plants, golden plants, and especially variegated plants — when used judiciously — are a great solution, and work well in contrast to dark foliage.  Just imagine this with an ‘Obsidian’ heuchera.  I have a couple of different Disporum in my garden and they are wonderful, easy plants. If you’re not familiar with them, they can be used in a similar way to a Soloman’s Seal (see below!).  The emerge in Spring looking like asparagus stems, then leaf out to lovely, arching branches with inconspicuous little flowers.  This one also claims to have interesting coloring in the autumn.  Sounds pretty great to me! 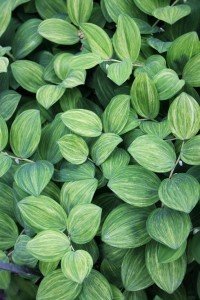 I’m a little wary of the description as “incredibly vigorous” but if you have a large, shady area this might be just the ticket. Not only do you get those gorgeous brushed leaves, but you also get dark blue fruit, and all in an elegant plant. Used in combination with ferns & hosta, you’d have a beautiful, low-maintenance, foliage-driven combo that will tolerate dryness once established. 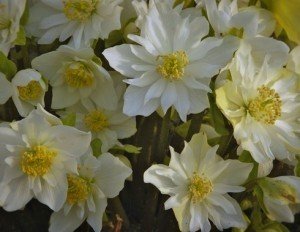 Hellebores are wonderful plants — they give you flowers when little else is going on in the garden, come in many colors, they have lovely & often shiny leaves the rest of the year, require very little of you (just trim off the old foliage when the new flowers start to erupt), and breeders are increasingly creating varieties where the flowers face upright.  This means you no longer have to bring the blooms in to float in a bowl to enjoy them.  I mean, you should probably still do that, as it’s a lovely way to enjoy the plants, but it’s no longer your *only* option for seeing the flowers up close without getting down on your knees outside in February. 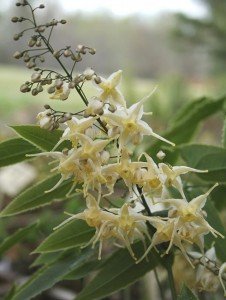 I love Epimediums as shady area ground covers. They’re tough as old boots, but produce the most delicate, ethereal flowers. They can also handle the dreaded dry shade areas without help (once established), and don’t require anything but trimming off expired leaves now & again. This variety looks to have more of a flower show than your average Epimedium, which is wonderful, as that’s what makes them so special. Whenever I have a blank dry shade area with shrubs and/or trees above, I always think to start my lowest layer with Epimediums to weave things together.

If you’re interested in what’s on my current “Plants to Get” watchlist, no matter when they were released, check out my Pinterest board.