Decorating for the Holidays – Lighting up the Darkness 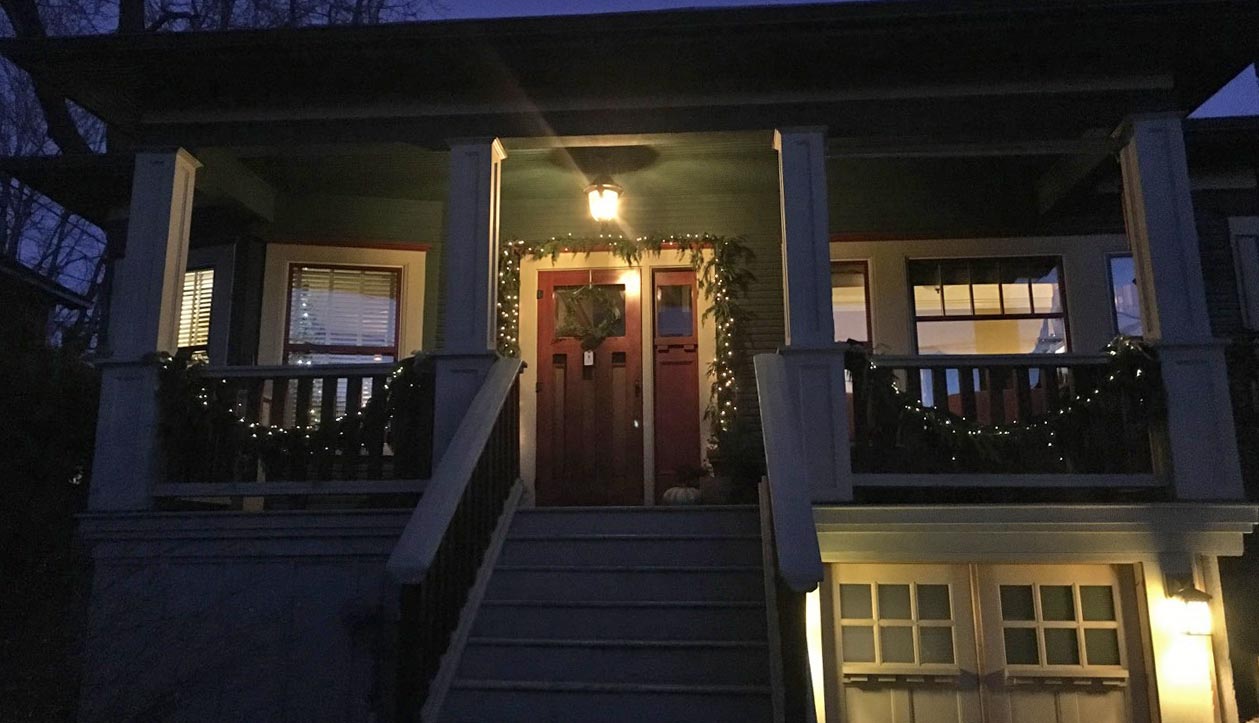 At the point that I’m writing this, we’re about a week away from the darkest time of year.  And this year has been better than most when it comes to sunshine.  So while it’s still pretty depressing to have only 8.5 hours of daylight (I’m easily affected by things like that), it’s been much worse in previous winters where the sun made an infrequent appearance.

Regardless, one of my coping mechanisms against the darkness is to festively decorate the house for the holidays, including lots of lights both inside & out. 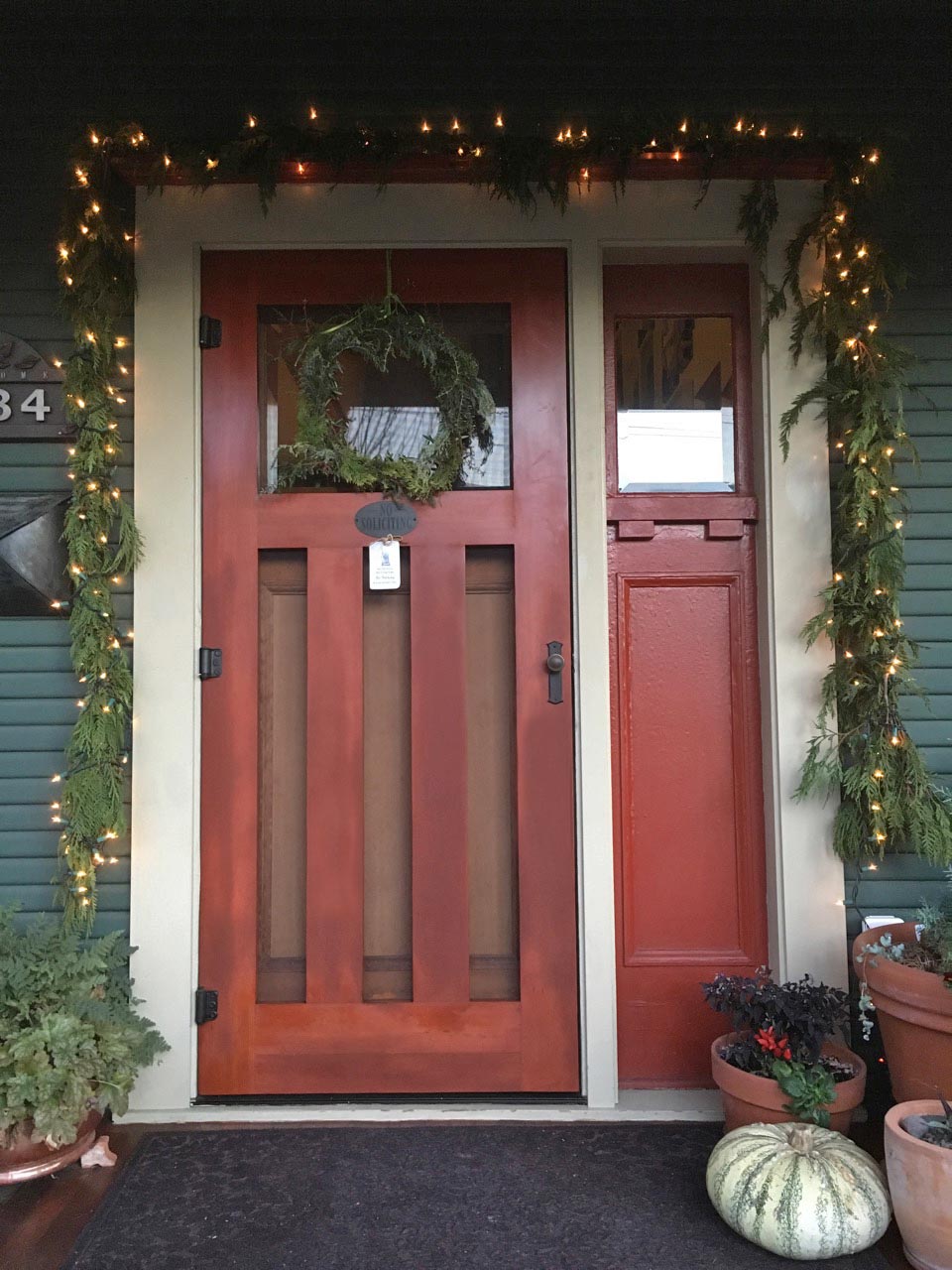 I like to put greenery & lights around the front door & across the front porch railings.  As you can see, we still have one of our Halloween pumpkins, and I’ll leave it until the end of the holiday season if it lasts because I think it’s beautiful. 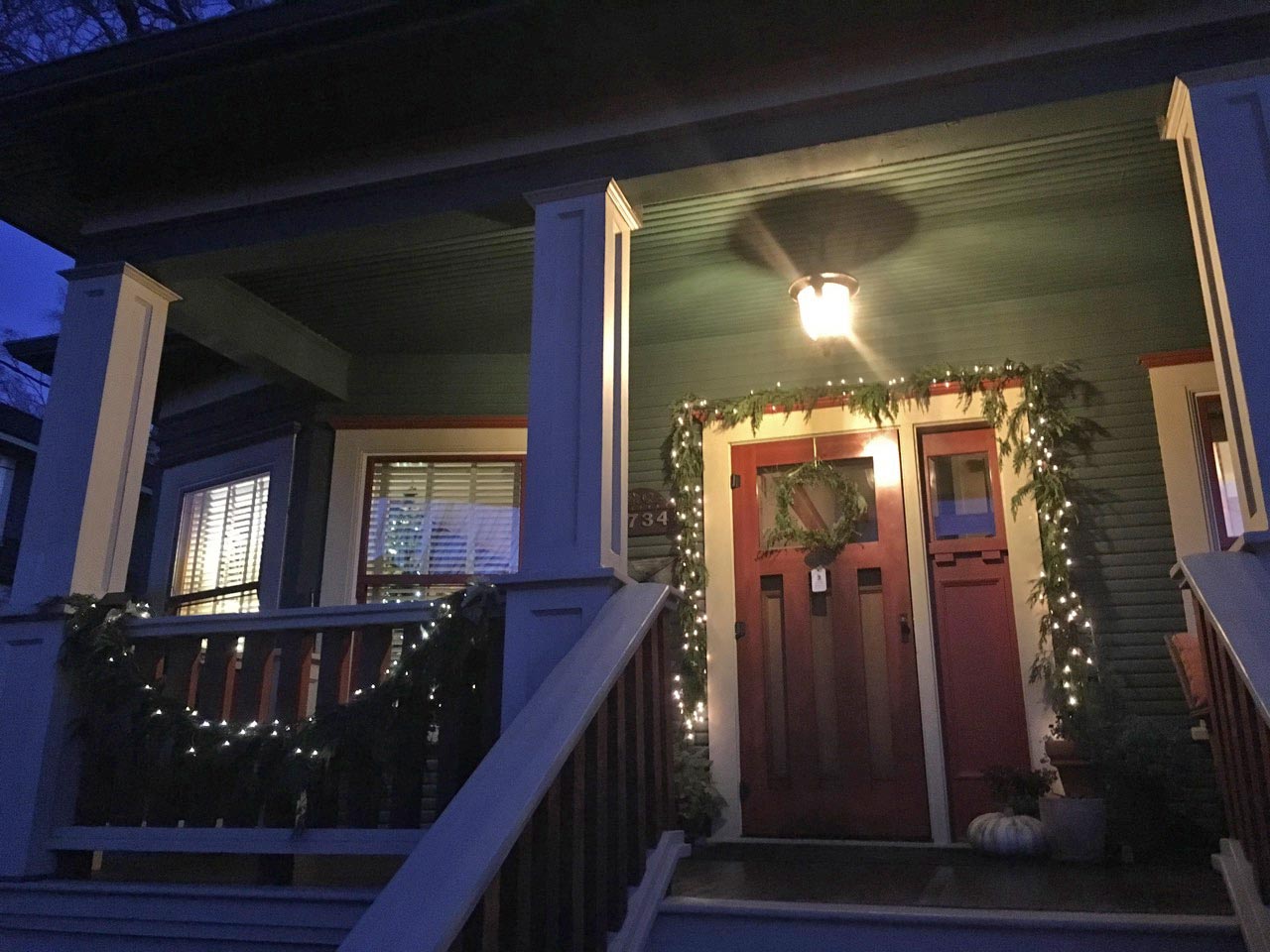 The lights on the railings are solar powered, and they’re actually pretty good about staying on for awhile after dark, especially on these sunny days. 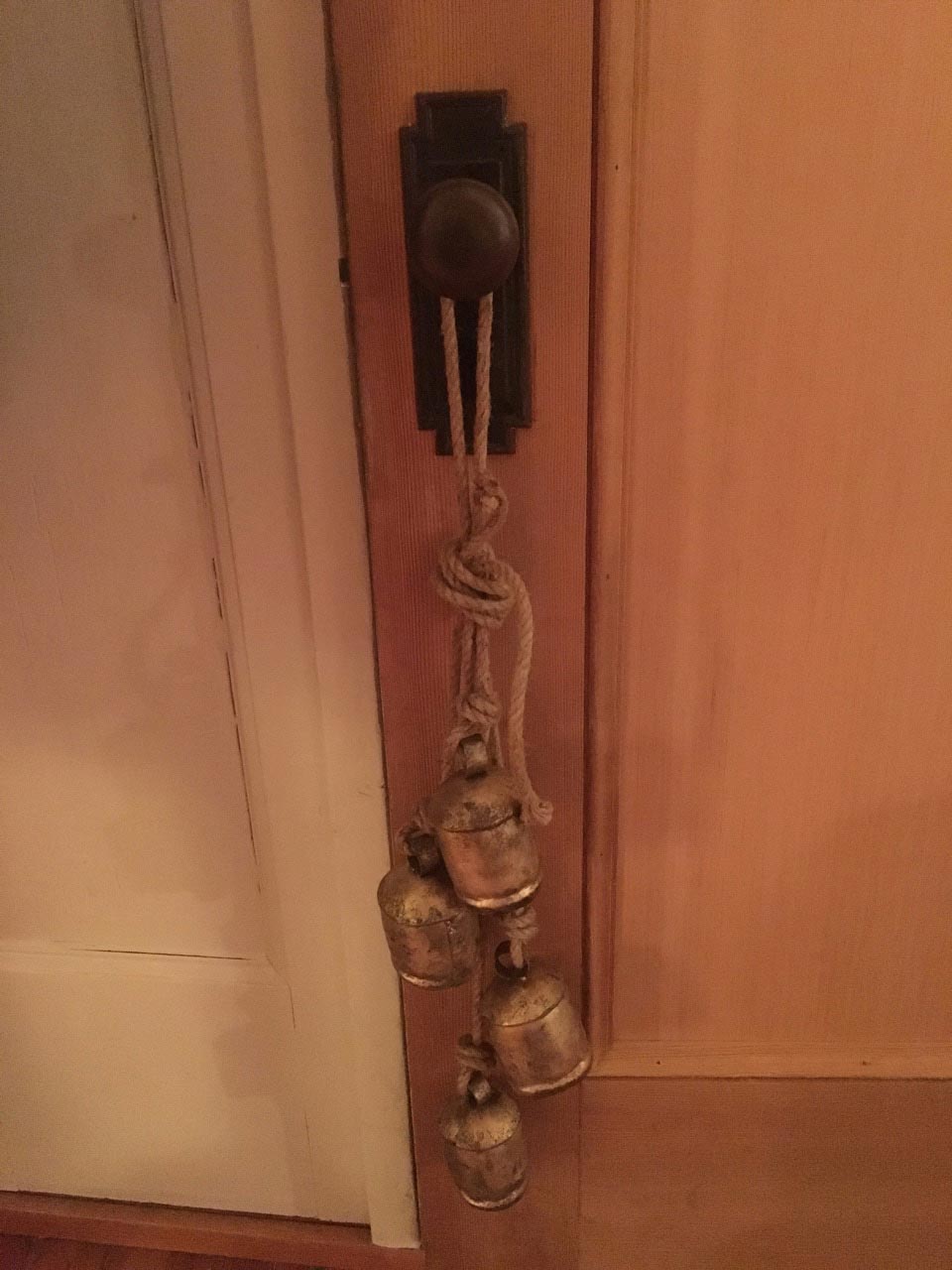 Growing up we had jungle bells on the front door, and nostalgically, we have them here too & it makes me really happy. 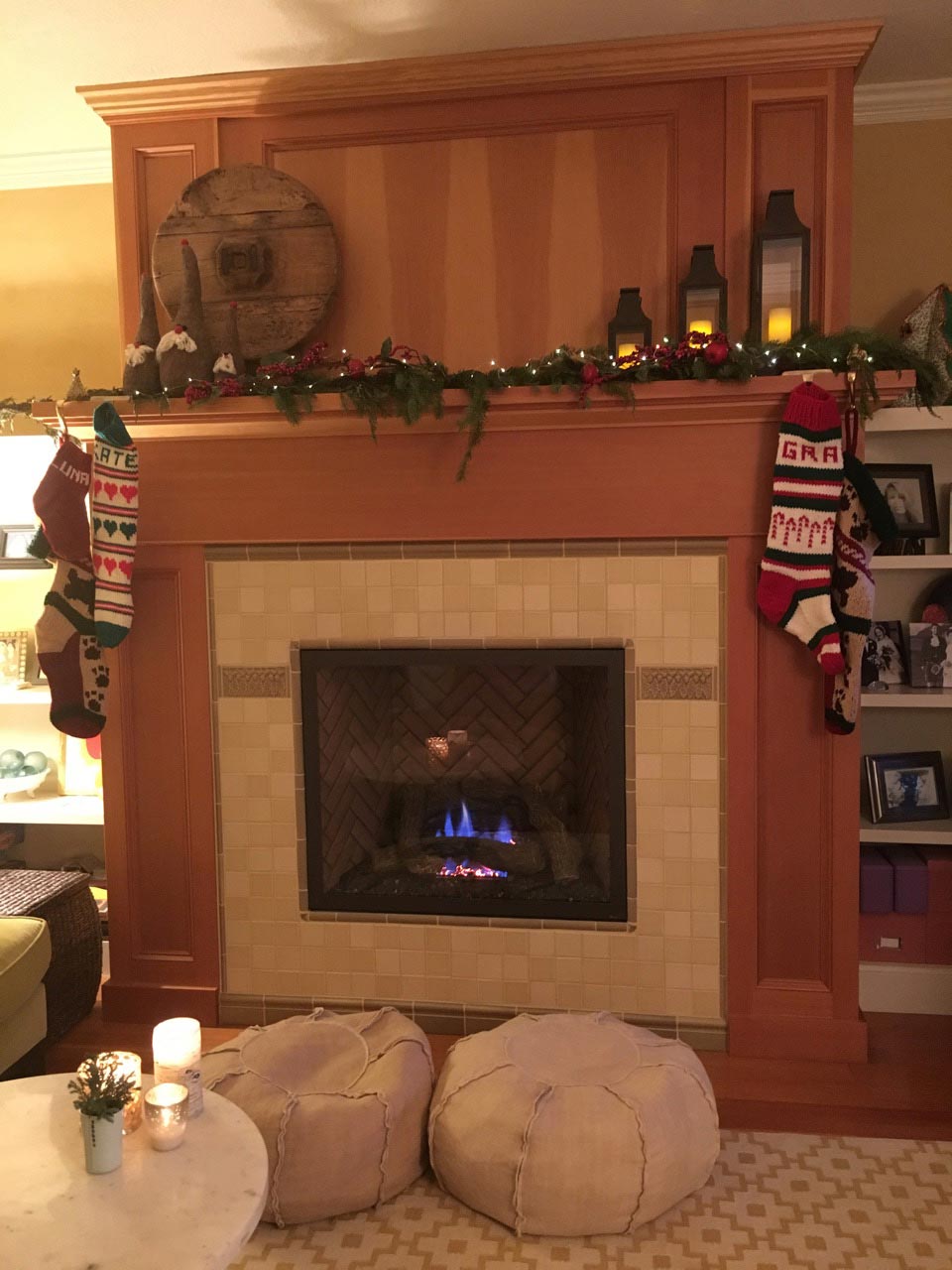 The mantle has some garland, some twinkle lights, and a few felted gnome-types.  I’m not usually one for the fanciful decorations, but these guys are truly delightful IMHO.  We always hang our stockings from the mantle, even if we don’t plan to fill them.  My stepmom knitted them for us — there’s one for Graeme & me, one for our long-deceased-but-not-forgotten cat, Luna, and one for each of our dogs, Gus & Ernie.  The dogs have the biggest stockings, and could easily fit entirely inside of them weighing in at only 10 lbs. 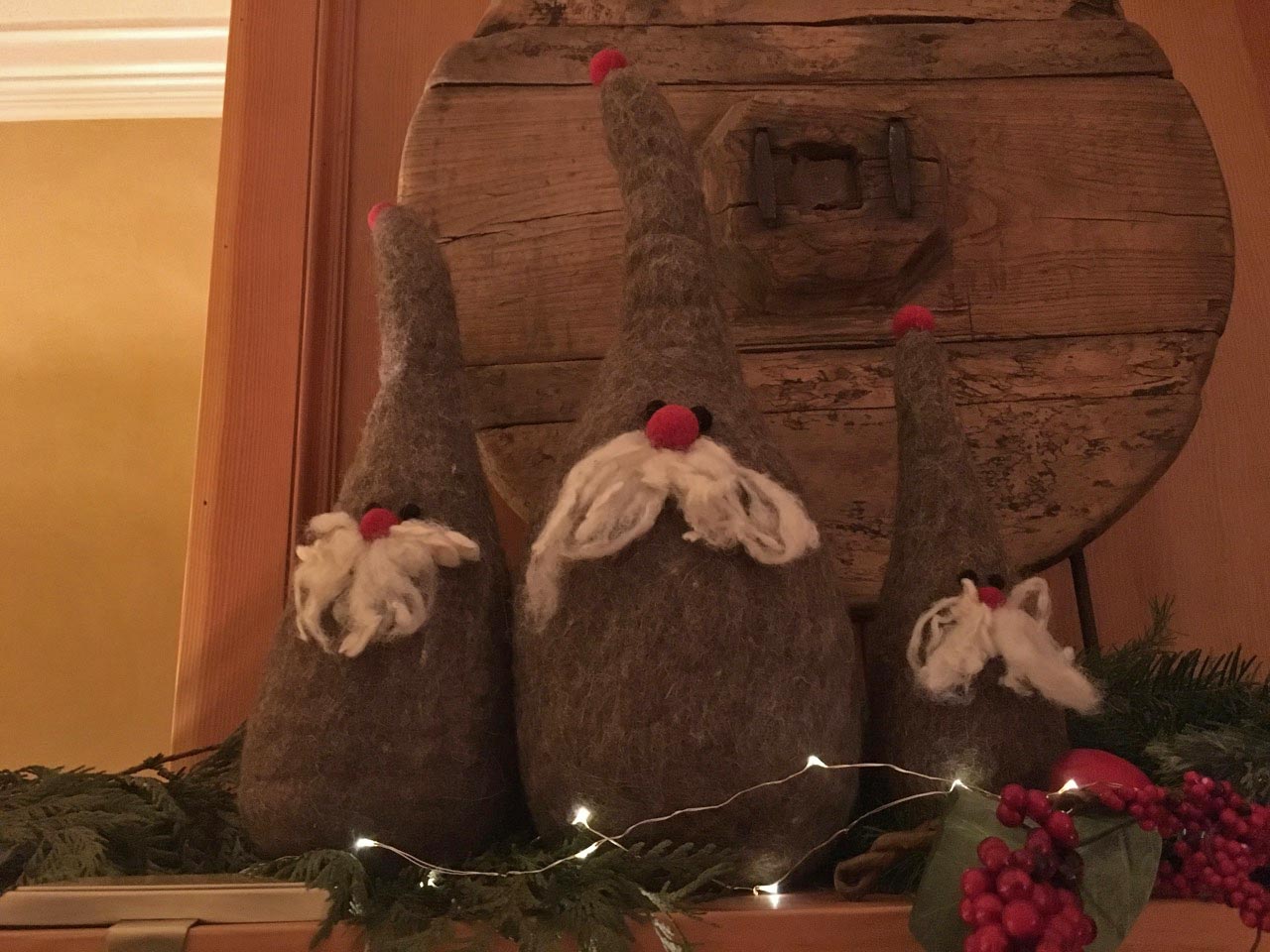 For a hot second my husband thought he might like a little collection of nut crackers, and this was the first one.  He’s since changed his mind, but this little guy sticks around to help make things festive. 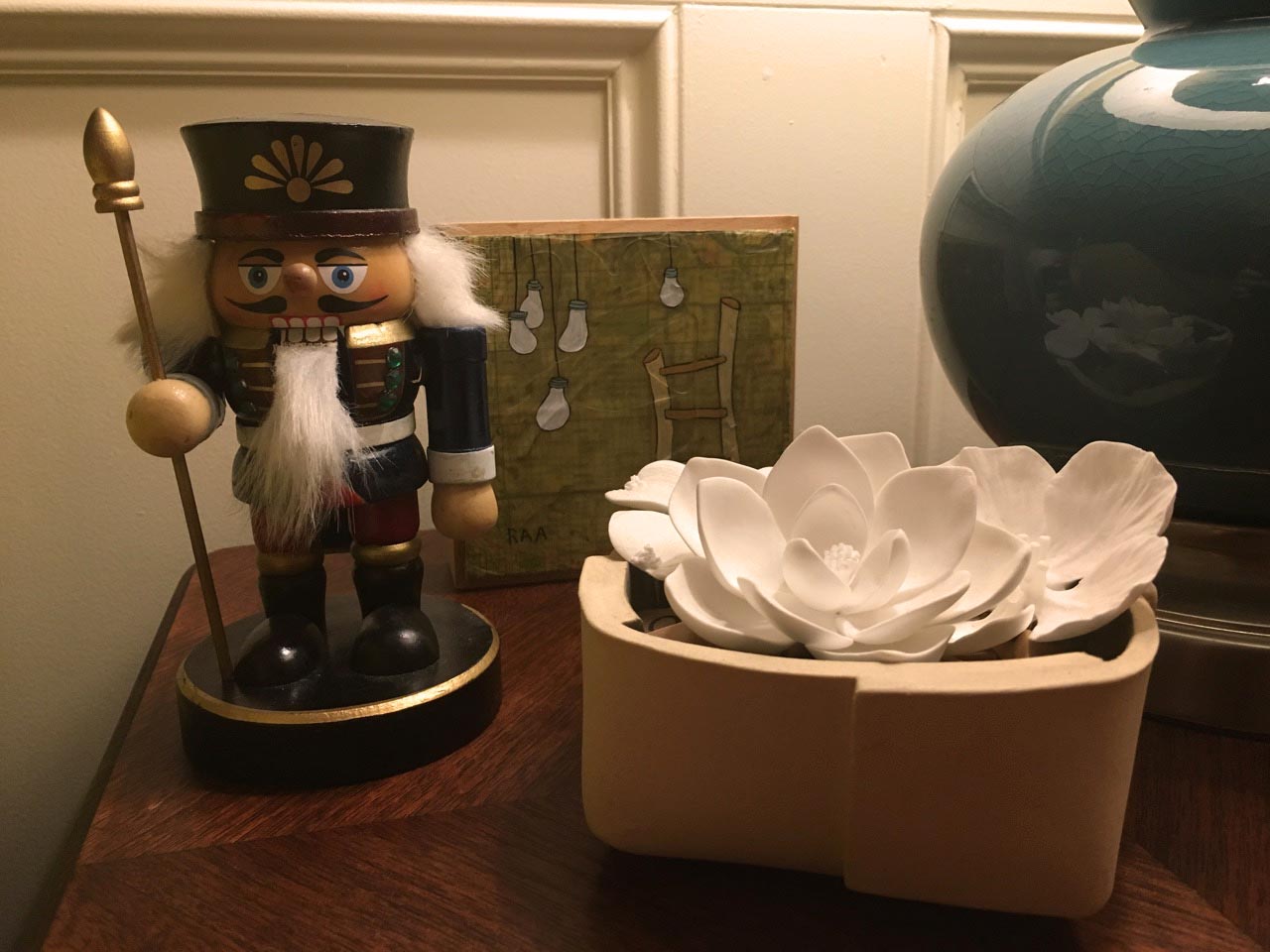 This corner of the living room has a potted norfolk pine that helps echo the garland on the mantle, but I mostly took this photo so you can see that the castor oil plants outside the window are still going strong IN THE MIDDLE OF DECEMBER.  They must be at least 10′ tall at this point. 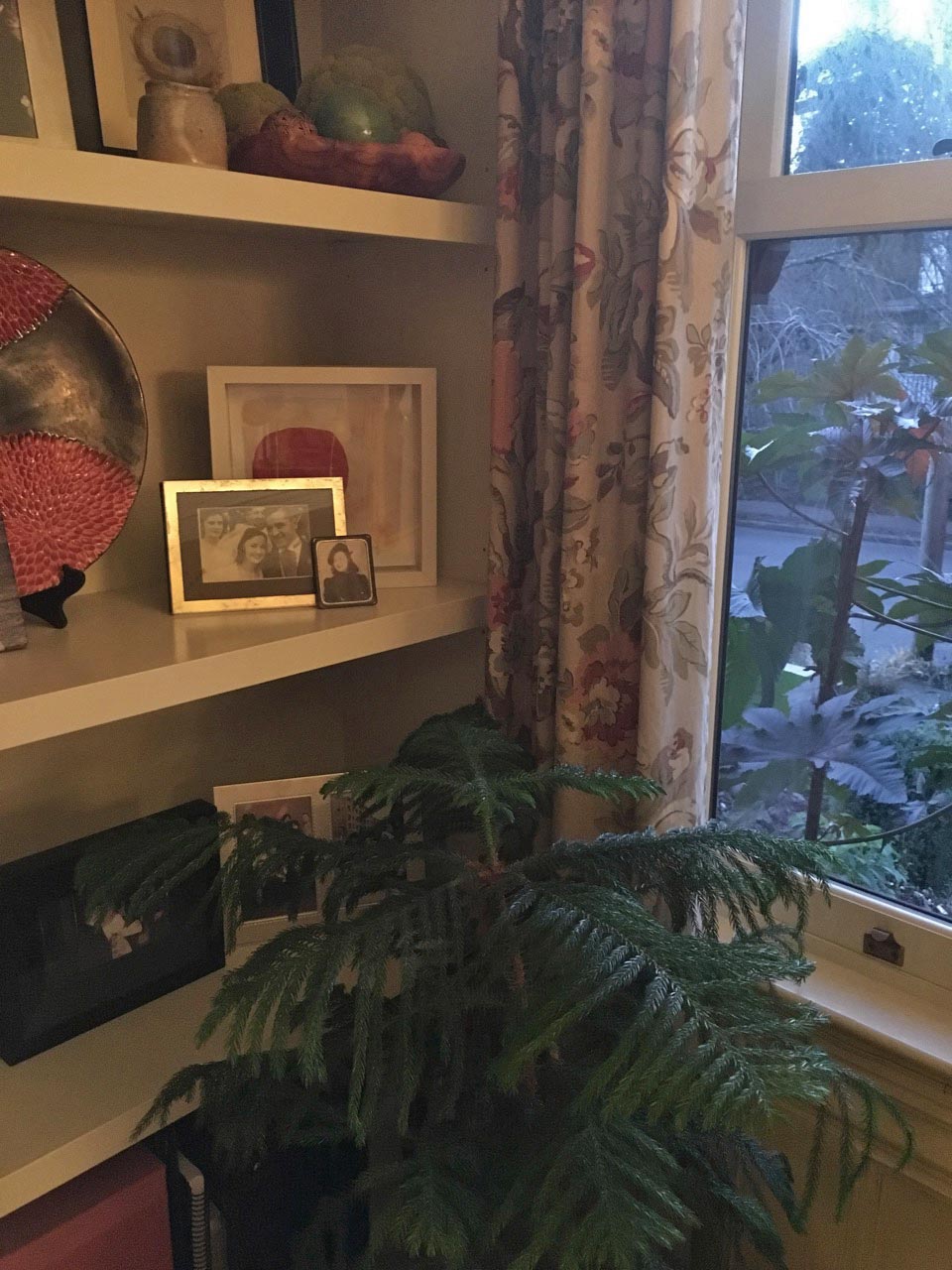 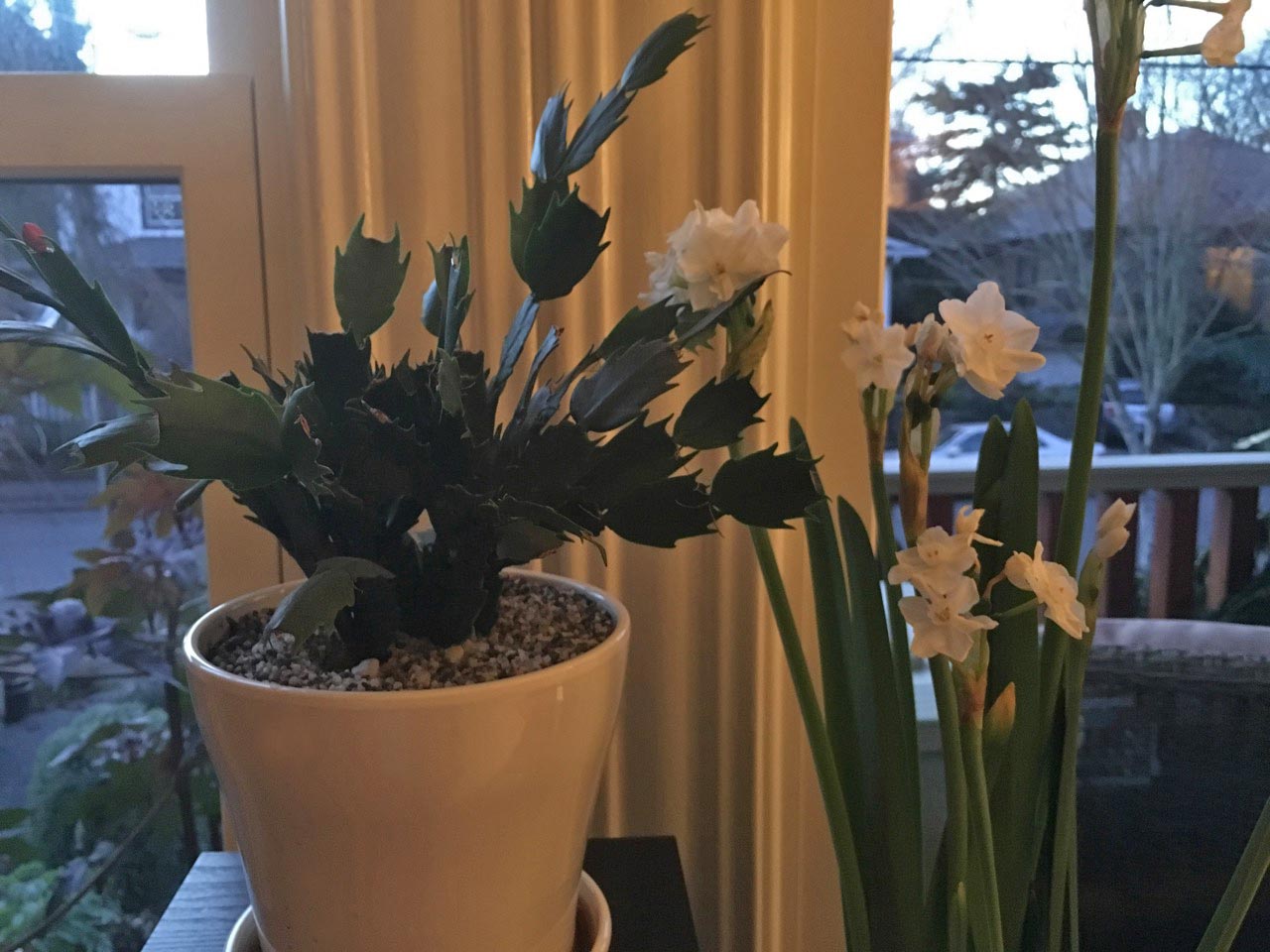 We put the christmas tree in the sitting room by the bay windows.  It’s artificial.  About a decade ago I found myself increasingly sad about the idea of killing a tree to decorate my home once a year, so we went fake & haven’t looked back!  The ornaments are mostly bird-themed along with a few sentimental gift ornaments from family, and a handful from trips we’ve gone on together. 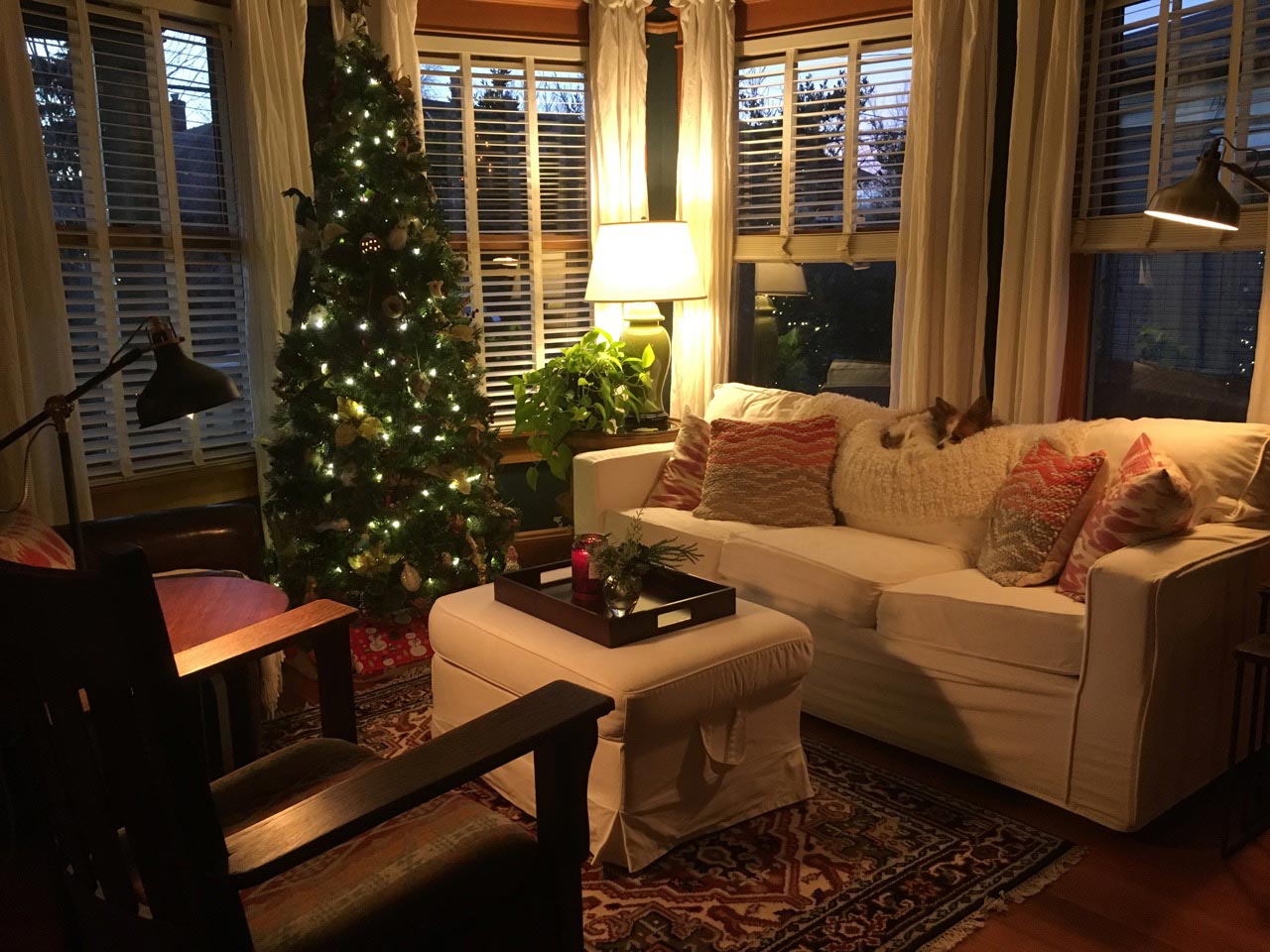 Moving into the kitchen I have a bouquet of greens from the garden, some more paperwhites, and a tiny poinsettia.  Last year I was able to keep our poinsettia alive until mid-summer, so we’ll see how this one does this coming year. 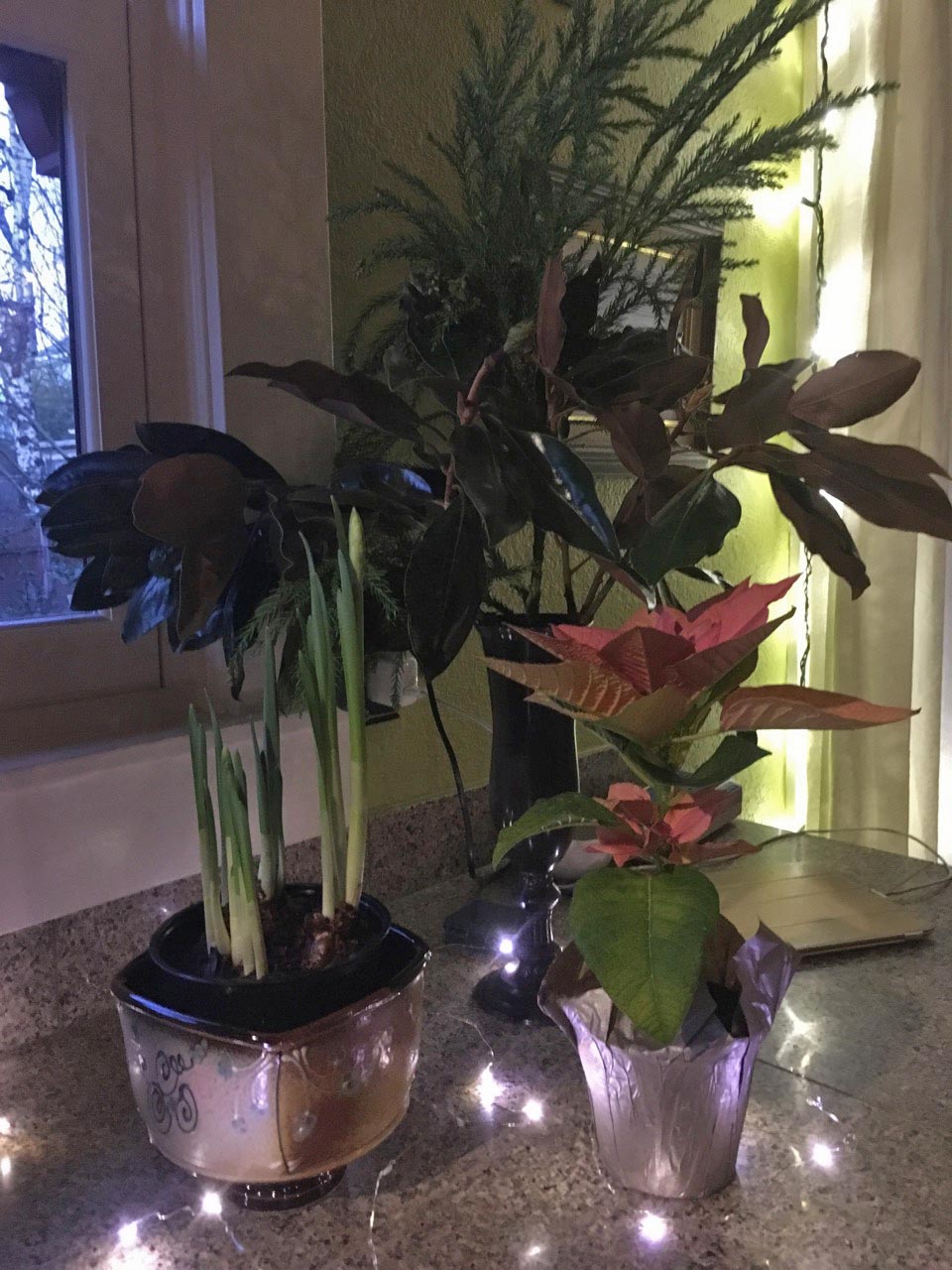 We keep a second, smaller christmas tree in the kitchen since we spend so much time in there.  It’s small enough that we just leave it decorated and cover it with a bag in a closet in the off season.  It’s like an instantaneous festive display when we bring it out to unveil it and plug it in.  After this holiday season I’m going to take advantage of the sales to get new ornaments for it — we’re thinking of woodland creatures like squirrels, foxes, raccoons, etc.. 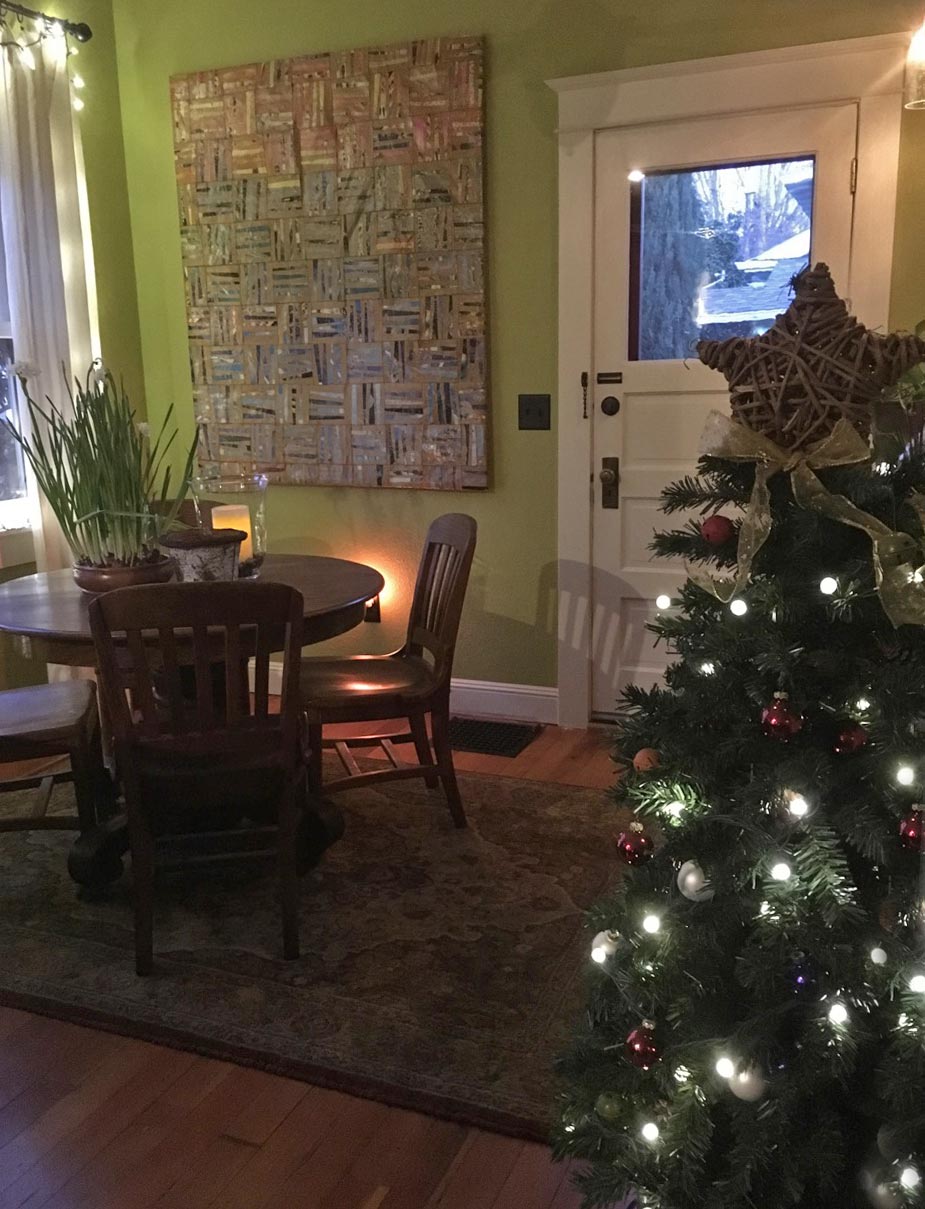 We put some extra lights around the windows to brighten things up over here & we like them so much that they might become a permanent fixture.  In addition to the paperwhites on the table that are just passing their prime, there is also an amaryllis that is painfully slow to get going.  Maybe it needs to be warmer? 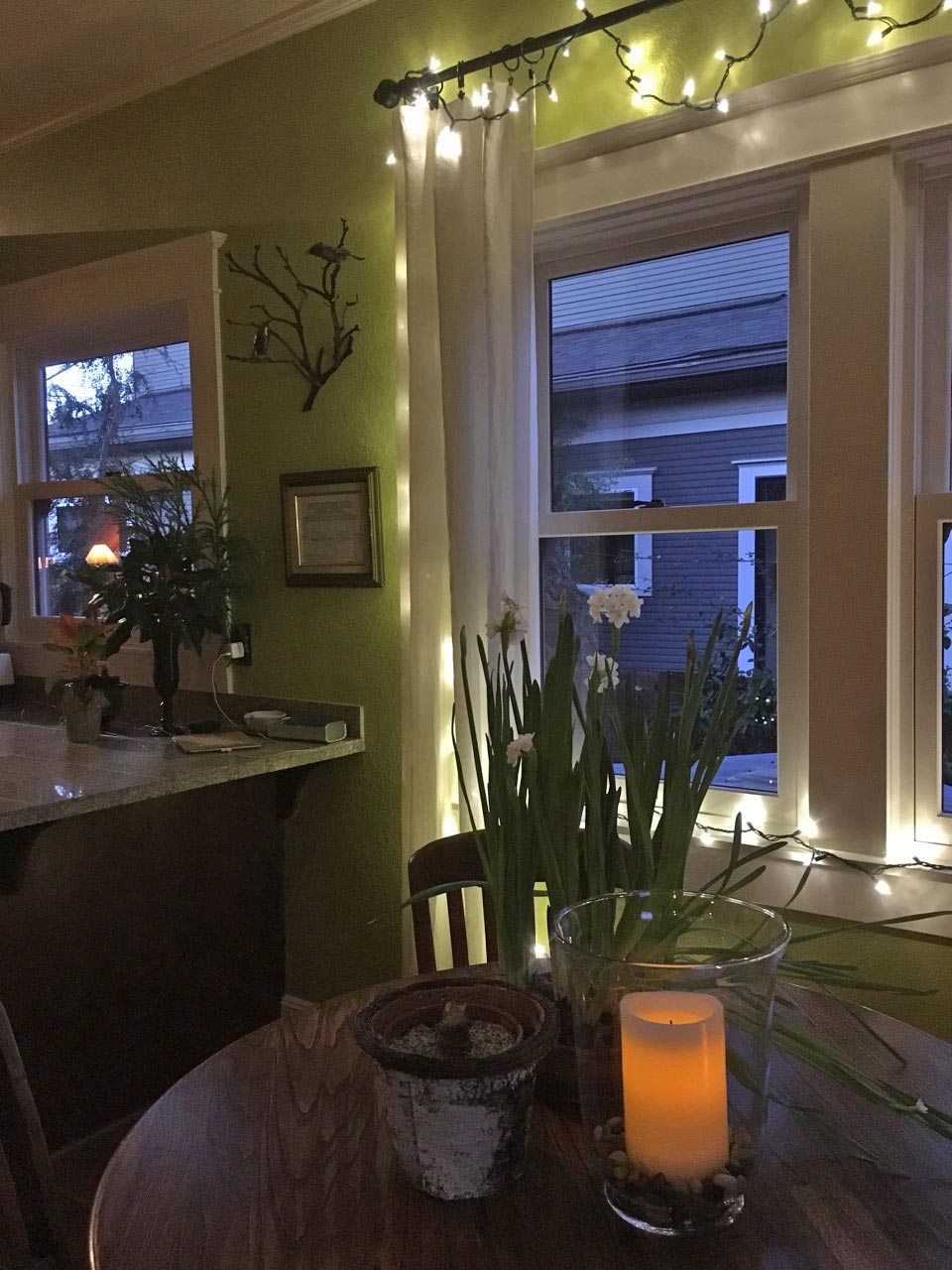 And that wraps up our seasonal display!  Depending on the weather at the start of January, I might leave some of it out longer than usual just to cheer myself up. It’s amazing what some extra lights & candles can do for my mood.