Every year we’ve lived in this house so far (we’re on our 6th year now) we’ve had at least one major project in the garden.  It started with some major overhaul, and a steep learning curve.  But in the last year or two we’ve been able to move on to some more detail-oriented projects.  In this context that means separating garden spaces with low gabion benches, adding rain barrels, beautifying paths and adding a bioswale.  I call these “infrastructure projects” as they involve lots of man power (usually by me and my husband) and define how we use our garden spaces inside of the major areas we’ve designated. 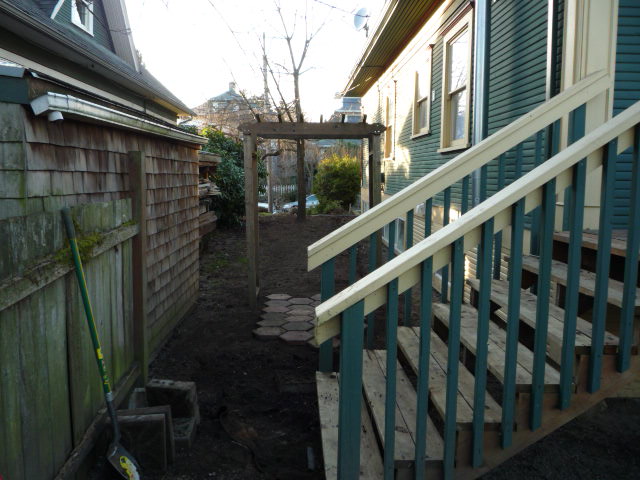 Early days before work started other than weeding

In retrospect, I was so thirsty for plants and privacy in our new garden that I overlooked some infrastructure projects in favor of boundary trees and shrubs.  So while we had a new fence put in on the South side of the property to completely enclose the back garden first thing, I should have immediately followed that project with staining the entire fence that surrounds us before planting anything at all.  Currently we’ve got two sides of fencing in faded cedar, and one side that the neighbor had installed and stained with a redwood stain long before we moved in.  Using a dark charcoal stain throughout would have unified those surfaces and given us a great backdrop for plants.  Now, of course, doing that job would involve creeping around the edges of the border beds behind the conifers hoping not to disturb the plantings too much as it needs to be done on days that are 50+ degrees, and I’ve deemed it too risky and uncomfortable.  And there’s no way I’d trust a paifenter not to trample the plants. 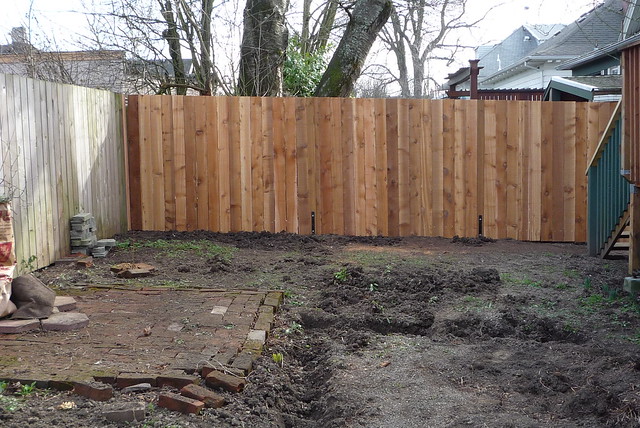 The new fence, before back garden work began

We also should have had all the soil removed that we need to have removed before any plants went in.  That way the machinery and foot traffic involved in such an effort wouldn’t destroy everything in its path.  In our defense, we didn’t know the full extent of the drainage issues we’d be dealing with at that time, but it certainly would have made it easier than it is now to remove a bunch of soil. 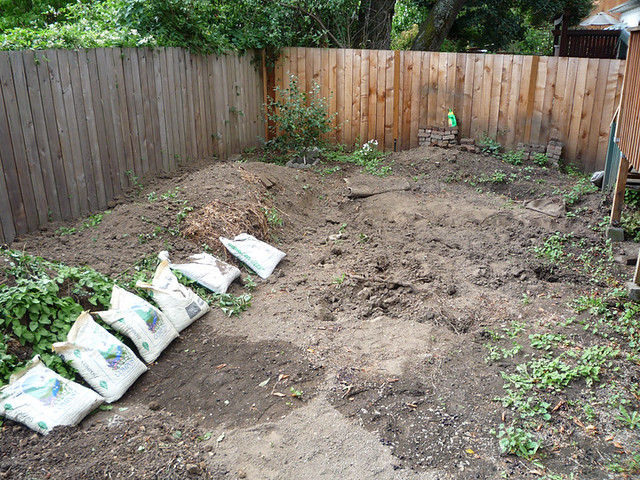 What I did instead of tackling these major projects is start learning about garden design and what plants thrive in what was then a new climate for me.  And with all the enthusiasm of new-home-ownership and a newfound love of gardening, I started acquiring and planting, acquiring and planting.  My initial goal was to establish structural plants and gain privacy.  Our garden at that point was a mostly empty lot except for the weeds that had be allowed to proliferate in the preceding years of the house being empty.  And about a gazillion iris rhizomes as we later learned were a favorite of the previous owner.   What remained after clearing out the weeds (via smothering) was an awkwardly placed weeping cedar that was dug up and taken away by some kind soul from Craigslist, two diseased apple trees, a volunteer cherry tree about 5 feet from the house, a lovely, huge ceanothus, and a pieris. 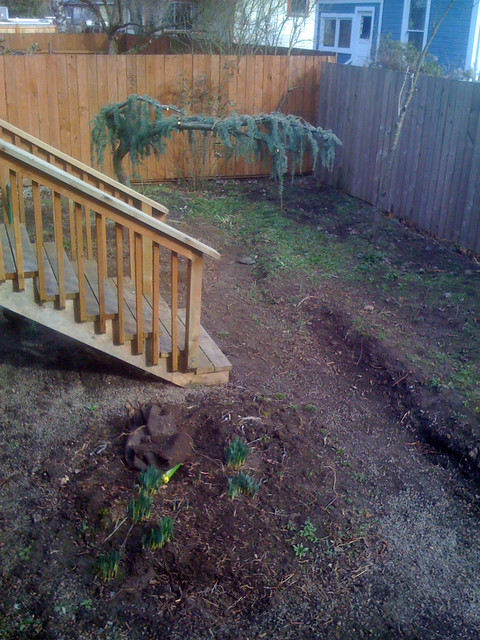 The unfortunately placed weeping cedar that someone from Craigslist removed, and one of THREE staircases to our terrible deck — we’ve removed two of them

Our house is situated quite close to the neighbors on both sides and the back, who each have a second story that looks down on our garden, which makes it feel like being in a fishbowl.  I longed for privacy, and a garden sanctuary, so I planted a screening conifer hedge along the back, and evergreens & conifers along the sides.  Six years later everything has exceeded the top of the six foot fence and every inch grown results in a more private feeling that I love.  After counting, I’ve planted 28 trees on our 50’x100′ property, and have taken out 3 ailing or unfortunately misplaced ones. 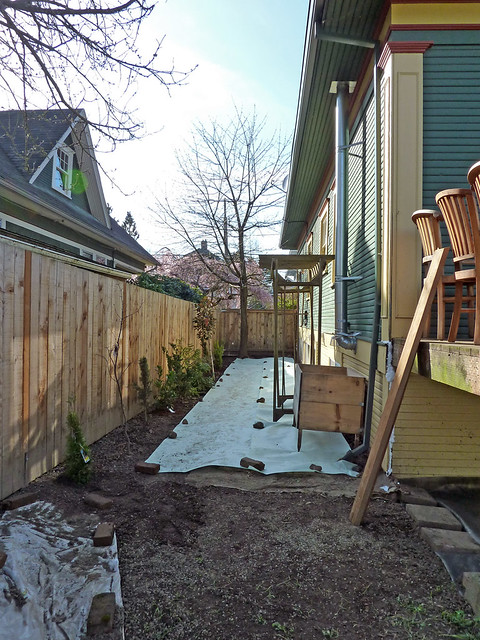 Progress is made with the fence installed, plants in place along the fence line, one of the staircases from the deck removed, and landscape fabric in place to kill the weeds

I am looking forward to days spent pottering around the garden, moving a plant here and a plant there, coping with increasing shade as things continue to grow, and some strategic pruning rather than the back-breaking work of lugging flagstones & boulders, removing soil by the bucketload, and building structures.  We do the work ourselves because it saves us money, we like learning how to do things and we love the feeling of accomplishment that comes with good results; but we’re also happy to see that kind of work behind us. 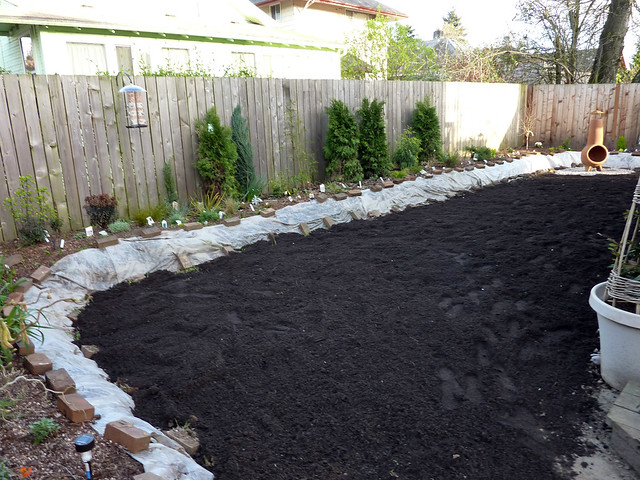 Early days of the back garden sans weeds, with regraded soil, and lots of compost

So here we are with our last remaining infrastructure project for the time being.  We know there are large projects in the future when we have work done on our home’s foundation, and the truly terrible deck behind the house is finally removed, but those are in the long game and aren’t things we can do ourselves. 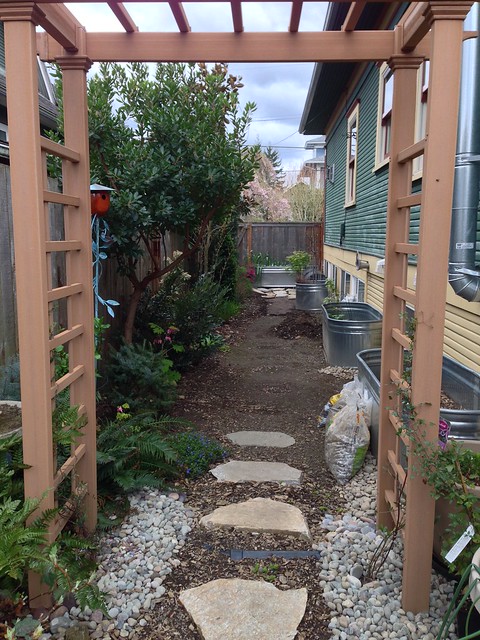 Fast forward to today, the same side from the photos earlier has much more mature plants along the fence line, a new arbor, and the start of a flagstone path — stones closest to the camera are in a temporary arrangement

This year we’ll be removing (hopefully) the last of the soil from the South side of the house to better manage drainage, and putting in a flagstone path from the arbor in the back, to the gate in the front. 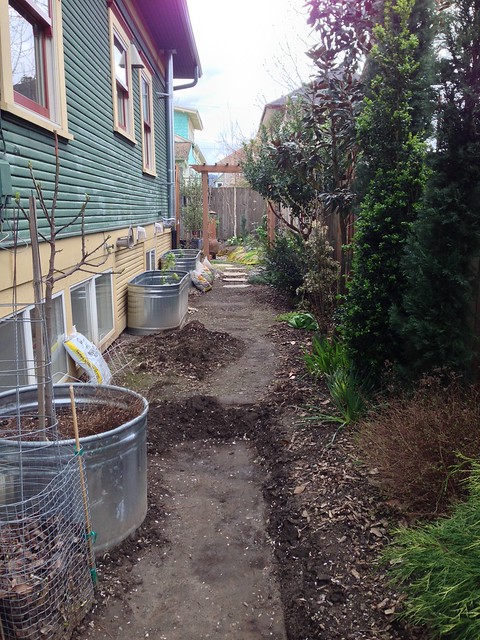 Looking the other direction, with a better view of the progress of soil removal

We’ve already installed some stock tanks for growing veggies (in lovely organic compost rather than 114 years of lead paint chips and who knows what), and the fence-line privacy screen has filled in nicely. 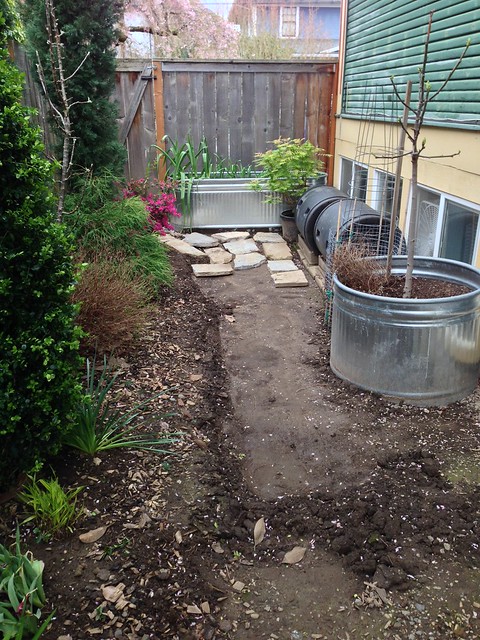 There’s about 1 yard of soil left to remove over there, and about 40 more flagstones to acquire.  Here’s to strong backs and lots of epsom salt baths ahead!